What is a recession? How economists define periods of economic downturn In economics, the word “recession” is a term no one ever likes to hear.

But aside from the stomach-plunging experience of a looming financial crisis, growing unemployment, and great fiscal uncertainty, what exactly is a recession?

What is a recession?

A recession is a significant economic downturn spread across the economy that lasts more than a few quarters.

More specifically, the term is typically defined as a period when gross domestic product (GDP) declines for two consecutive quarters. This prevailing line of thought was popularized by economist Julius Shiskin in 1974.

But the truth is, there are a multitude of indicators that determine if we’re in a recession.

Perhaps a better way to understand how experts define recessions is to liken it to how Supreme Court Justice Potter Stewart infamously described his opinion on obscenity: Economists know it when they see it.

In a recession, you may feel these compounding effects a few different ways: jobless claims go up, spending habits change, sales slow down, and economic opportunities dwindle.

So in practice, recessions are marked not only by a slump in real GDP, but also a decline in real personal income, a drop in manufacturing sales and production, and a rise in unemployment rates.

Recessions and the business cycle

To understand the macroeconomic variables that constitute recessions, Giacomo Santalego, PhD, a senior lecturer of economics at Fordham University, says it’s important to acknowledge the relationship between recessions and the business cycle.

A business cycle tracks the up-and-down fluctuations in U.S. economic activity around a long-term growth trend. Because the cycle traces the wide-ranging upward and downward comovements of economic indicators, it is often a focal point for economic policy.

In fact, recessions are considered to be a normal part of the business cycle. According to the NBER, there have been 33 recessions in the United States since 1857. 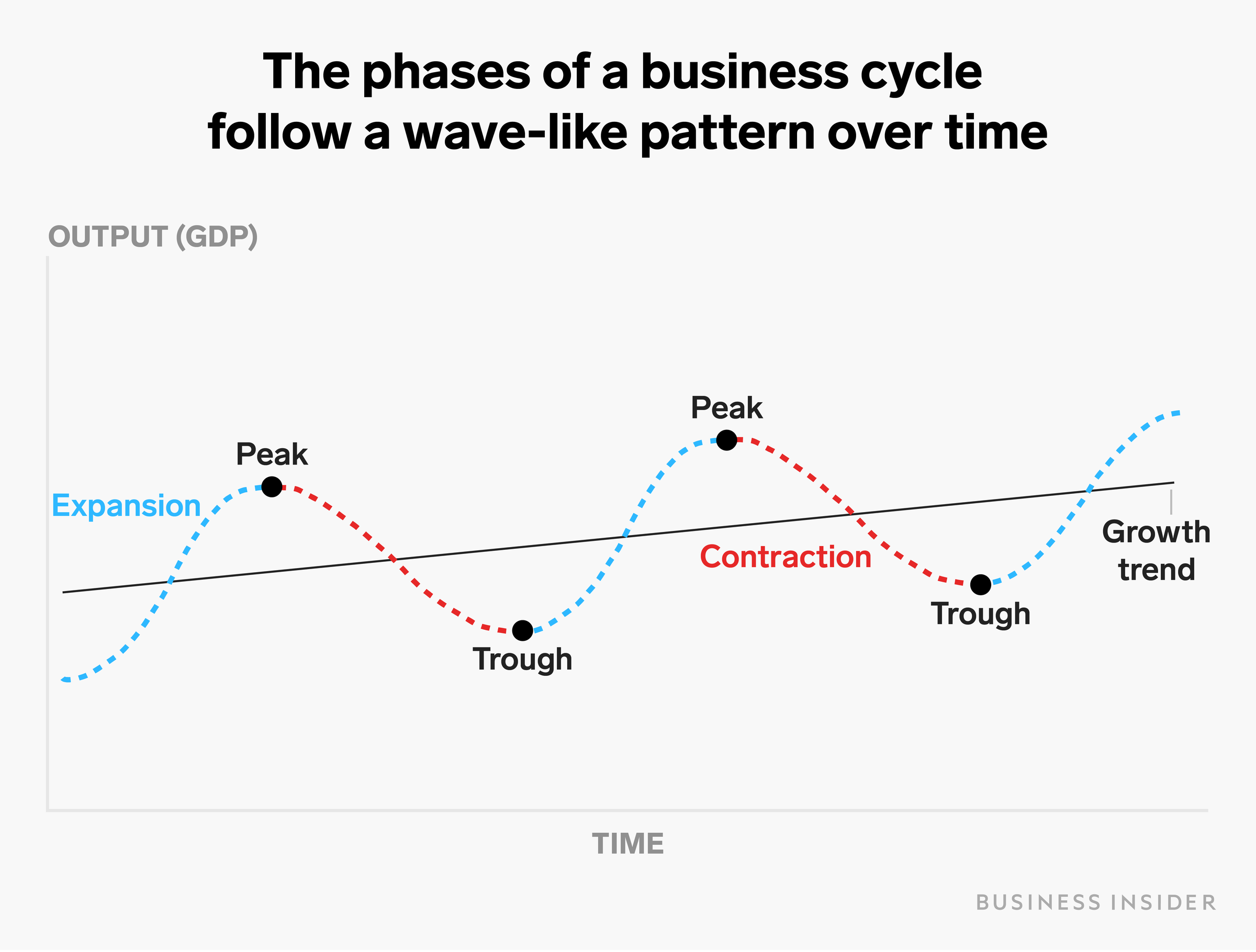 Business cycles are understood as having four distinct phases:

It’s important to note that business cycles do not occur at predictable intervals. Instead, they are irregular in length, and their severity is reflected by the economic variables of the time.

What causes a recession?

Generally speaking, expansion and growth in an economy cannot last forever. A significant decline in economic activity are usually triggered by a complex, interconnected combination of factors, including:

Economic shocks. An unpredictable event that causes widespread economic disruption, such as a natural disaster or a terrorist attack. The latest example is the recent COVID-19 outbreak.

Loss of consumer confidence. When consumers worry about the state of the economy, they slow their spending and keep whatever money they can. Because close to 70% of GDP depends on consumer spending, the entire economy can drastically slow.

High interest rates. High interest rates makes it expensive for consumers to buy houses, cars and other large purchases. Companies reduce their spending and growth plans because the cost of financing is too high. The economy shrinks.

Deflation. The opposite of inflation, deflation means product and asset prices fall because of a large drop in demand. As demand falls, so do prices as sellers try to attract buyers. People put off purchases, waiting for lower prices, causing an ongoing downward spiral or slow economic activity and greater unemployment..

Asset bubbles. In an asset bubble, the prices of things like tech stocks in the dot-com era or real estate before the Great Recession rise rapidly because buyers believe they will perpetually increase. But then the bubble bursts, people lose what they had on paper and fear kicks in. As a result, people and companies pull back on spending, giving way to a recession.

How long do recessions last?

Due to the unpredictable nature of recessions, it’s difficult to gauge how long they last.

“At some point, markets turn around,” Santangelo says. “What causes that economic turnaround? Same thing at the top: Things that are not predictable.”

The NBER follows a business cycle dating procedure that is retrospective, meaning it waits for sufficient data to proclaim when we reach its phase of the cycle. What we can do, however, is look at learnings from past recessions:

At the time, the Great Recession was the worst and deepest economic downturn since the Great Depression. It was a result of bubbles in real estate and complex investments called derivatives.

Even though it lasted just 18 months, the recession had a profound impact on the decade to follow, because recovery — the path back up from the bottom — can take years.

While the housing market recovered, there are currently millions of Americans who still haven’t regained what they had lost, showing that a rising tide lifts all boats only if it can reach each of them.

The dot-com recession was the result of a bubble in technology stocks as commercial use of the internet rapidly expanded. Plus, the Y2K problem — the scare that computers and software would break down because it used two-digit numbers to signify years — caused massive amounts of one-time purchasing.

The opportunity to own some tech drew in more individuals and institutions, driving up share prices. But, like any bubble, it couldn’t last, especially after 9/11 shook the country.

This recession, which lasted eight months, was spurred by multiple factors: an oil price spike, the move of jobs and manufacturing to Mexico and Canada with the start of NAFTA, two years of Fed interest rate increases, and the slowing of defense spending with the end of the Cold War.

The end of the Gulf War helped stabilize oil prices, which allowed the economy to hit bottom. But recovery was hard, with unemployment growing to peak at 7.8% in 1992.

So what makes a recession a recession, other than a subjective sense of a “bad” economic cycle with everything slowing down, people losing wealth, and unemployment rising?

The short answer: There are many factors that go into defining a recession. But understanding that they are part of the normal ebb and flow of the economy can go a long way in helping you prepare and weather the downturns inevitably coming your way.

NOW WATCH: Why electric planes haven’t taken off yet

END_OF_DOCUMENT_TOKEN_TO_BE_REPLACED

The Summer Dress Of Your Dreams Has Pockets

Checking Out is a new shopping column straight from the cart of Simone Oliver, Refinery29’s global EIC. She wears many hats (all of them stylish), and she's always got an inspiring, wish-worthy list on deck. Watch this space for monthly market musings from Sim... END_OF_DOCUMENT_TOKEN_TO_BE_REPLACED