‘He’s Going to Do Whatever He Wants’ 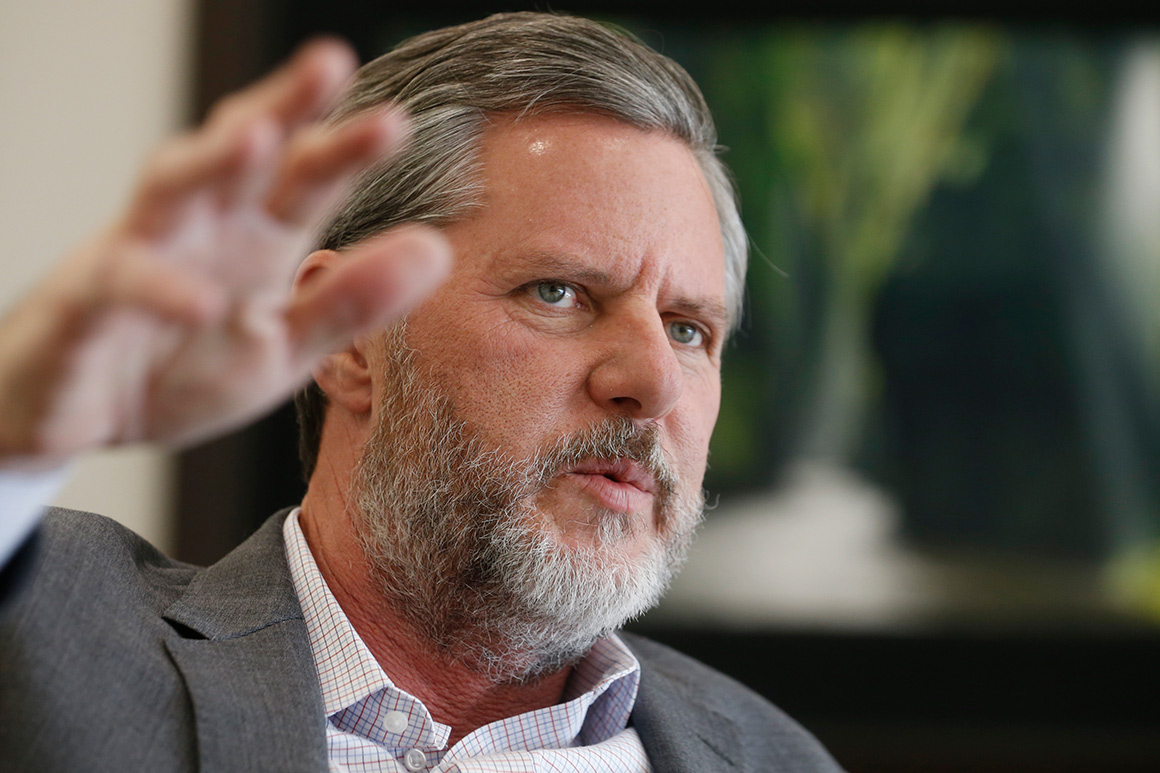 Lynchburg, Virginia, isn’t a stereotypical college town. It isn’t politically liberal. It doesn’t have the crunchy affect of an Ann Arbor or even a Charlottesville.

But even here, where Liberty University drives a large part of the economy—and where school president and chancellor Jerry Falwell Jr. strides across the landscape as a local grandee—anger over Falwell’s decision to bring university students back amid a coronavirus pandemic is boiling over.

“Remember when people wanted to tar and feather folks? That’s about the level it’s at in the Lynchburg community right now,” a former longtime Falwell associate told me over the phone. “You have …16,000 petri dishes he’s inviting back to Lynchburg, who have gone out all over country for spring break—he’s inviting them back into our city, our community, knowing that at some point they’re gonna have to interact with the public.”

Throughout the Commonwealth of Virginia, efforts to stop the spread of the novel coronavirus have led colleges to upend their plans for the semester by moving classes online, canceling commencement ceremonies and—critically, from a public-health perspective—moving students out of dorms. Virginia Tech is practically begging students to stay away, enticing them with cash rebates. The University of Virginia has shut down its dorm system, save for those few students “who have no other option.”

Liberty University, meanwhile, has invited its students to return to the dorms, whatever their circumstances might be. Falwell has said this decision was in students’ best interests—that students would be better off if they returned to campus before the coronavirus spread—but that suggestion has met with exasperation by public health experts, state and local officials, and many residents of Lynchburg.

As President Donald Trump pumps out messages that fears of the coronavirus are overblown, and Americans try to square that with their local regulations and personal worries, Liberty has become an even more intense version of the national conflict, with students and faculty left trying to weigh their own interests against a defiant leadership with a constantly pivoting message—in this case, a person who is used to having total control of the institution.

For people who’ve traveled in Falwell’s orbit, the decision is classic Jerry.

“He doesn’t think anyone should be able to tell him what to do, and he’s going to do whatever he wants,” a former Liberty University executive told me.

“He’s very defiant,” said another longtime Falwell associate with close ties to the Falwell family. “It’s very much in his character. That’s a family trait. His father was the same way.”

Now, Falwell has maintained that people have this all wrong: Liberty simply allowed students to return to live in the dorms, if they so choose, while finishing up the semester in online courses. “We think Liberty’s practices will become the model for all colleges to follow in the fall, if Coronavirus is still an issue,” Falwell told the school’s news service in a March 23 statement.

In reality, the situation is more complicated. The Liberty practices Falwell touts include moving most classes online, increasing on-campus sanitation, putting “do not sit” signs on certain chairs in common areas, and inviting back to campus any students who wish to return to live in the densely populated dorms. And while, yes, classes are now online, repeated emails from the university to faculty members over the past week and a half insisted that all instructors must conduct their online classes from their campus offices, and that they are still expected to hold office hours and welcome students for face-to-face interaction.

Among Liberty faculty, there is widespread confusion about what exactly is expected of them during the coronavirus pandemic—much of it driven by a lack of clarity in the university’s own communications. In a March 16 email sent by the university, faculty were told that while their classes would be moved online, they must conduct their classes from their on-campus offices. A March 19 email to faculty reiterated that instructors must be on campus during their class times and office hours. Faculty members were further told that if they wished to avoid being on campus at this time, they should submit requests for consideration to their department chairs, who would then run those requests up the chain of command. And a March 25 email reminded faculty that in order to work from home during the pandemic, they must include an explanation for their request.

In light of these emails, some faculty were puzzled by Falwell’s appearance Tuesday on ABC News Live. During his interview, the chancellor insisted that any faculty who “feel they’re at risk … don’t have to come into the office,” and that “only essential staff” were on campus, including “cleaning staff, food-preparers and security.”

Falwell has said he does not know the exact number of the students on campus at the moment, but this week a spokesperson for the school estimated the number to be around 1,900. Add this to hundreds of faculty and support staff, and you’ve got a buzzing, populated campus at a time when the CDC recommends avoiding gatherings of more than 10 people.

In the statement published by the university on Monday, March 23, Liberty said Falwell “has been consulting with medical professionals daily, including Dr. Jeffrey Hyman of Northwell Health, New York’s largest health care provider.”

On Wednesday, when I reached Dr. Hyman’s office for comment, an employee consulted with the doctor before speaking on his behalf and distancing Hyman from Falwell’s decision. “He himself has nothing to do with that,” the employee insisted.

After I emailed Falwell about the discrepancy between Hyman’s account and the university’s claim, Liberty quietly revised the statement on its website to excise the doctor’s name: “Falwell said the university has been consulting with medical professionals daily, including a physician from New York’s largest health care provider.” (The article on the Liberty news service website does not include a notice that the story has changed.)

Asked why the school would remove Hyman and other medical professionals’ names, a university spokesperson told me that “many health professionals who provided advice to Liberty University recently began receiving calls from the media. They are private people who do not talk to the media and plan to keep it that way.” When I noted that the office of the medical doctor in question did, in fact, speak to me and denied his involvement with Falwell’s decision, I received no answer.

In the same March 23 statement on Liberty’s site, Falwell claimed that he “received a favorable reaction” when he told Lynchburg’s city manager and mayor about his decision to allow students to return to the dorms. “They thanked us for making that decision,” Falwell said.

According to Svreck, as early as March 16, she and Mayor Treney Tweedy asked Falwell to get in line with the majority of other colleges in the nation by closing the Liberty campus amid the Covid-19 pandemic. (In an interview with the Daily Beast, Svrcek went even further, saying Falwell misled her “to believe that the school was … abandoning plans to invite students back into residence halls following spring break.”)

Svrcek characterized Falwell’s relationship with the community as a “professional and typically collaborative.” When asked whether Falwell typically follows city recommendations or ignores them, Svrcek simply said, “Jerry Jr. is an independent thinker.”

On March 24, Mayor Tweedy said in a statement that she had understood residence halls would not be open, except to a handful of international students. “I want the residents in this community to know that at no time did I or the City Manager endorse having the students return to Liberty University’s campus or any of the other college or university campuses in our community,” Tweedy said, noting that while Liberty University is an important part of the Lynchburg community, she nevertheless believes Falwell’s decision to welcome students back to campus is “reckless.”

In the same March 23 statement, Falwell also said that “the communication lines were open” with the office of Virginia Governor Ralph Northam during the decision-making process. “They sent a message back that they were very grateful to us for letting them know what we had decided,” Falwell said—a characterization vigorously disputed by the governor’s office. In a statement, Alena Yarmosky, a spokeswoman for Northam, said the governor is “concerned” that Falwell has kept Liberty’s campus open. “All Virginia colleges and universities have a responsibility to comply with public health directions and protect the safety of their students, faculty and larger communities. Liberty University is no exception," Yarmosky said.

At Liberty, the confusion over what the school’s stance is on the coronavirus pandemic is, at least to an extent, the result of how Falwell himself has publicly spoken about the issue.

“We’re still opening,” Falwell said in an appearance on Todd Starnes’ radio show on March 18, “but we’re not having classes of more than 10 people in a room at a time. But we can still operate that way, because we do a lot online. But most of the students, from what we can tell, are coming back and they’re gonna live in the dorms.”

Compare that to Falwell’s appearance on Starnes’ program on March 25: “It’s just amazing how much ignorance is out there. Liberty did not reopen.” Or, likewise, his appearance that same date on CNN’s New Day, during which he said that “most of the press reports have been false: Liberty did not reopen. Liberty has between 1,000 and 2,0000 students on a campus built for 15,500.”

Perhaps this is a debate over the meaning of what it means for Liberty to be “open.” In his most recent statements, Falwell seems to be defining the term as opening the campus back up to all students and holding classes in classrooms. But the local and state officials and community members who have condemned Falwell’s decision seem to have a different definition: To them, a college campus full of thousands of people is an open campus, regardless of whether or not the classes it offers are being conducted online.

The question that everyone seems to have for Falwell is simple: Why? Why allow thousands of students, faculty and staff to congregate on campus when doing so goes against the guidelines of nearly every health organization in the Western world?

I put the question to Falwell in an email. “We are not a sole exception,” responded Scott Lamb, Liberty University’s spokesman, pointing to a news story reporting that other Lynchburg-area colleges are also currently housing students (five remain at Randolph College, and 19 at the University of Lynchburg).

END_OF_DOCUMENT_TOKEN_TO_BE_REPLACED

‘De-Extinction’ Company Will Try To Bring Back the Dodo

An anonymous reader quotes a report from Gizmodo: Genetic engineering company Colossal Biosciences said Tuesday that it will try to resurrect the extinct dodo bird, and it's received $150 million in new funding to support its "de-extinction" activities. The do... END_OF_DOCUMENT_TOKEN_TO_BE_REPLACED

The Guardian view on rugby union: a sport rich in drama is at a crossroads | Editorial

Many of its current travails are the result of issues left unresolved 30 years agoAre we here to praise rugby union or to bury it? Over the past few days, the sport has been celebrating the “greatest try of all time” – the one scored by Gareth Edwards for the ... END_OF_DOCUMENT_TOKEN_TO_BE_REPLACED