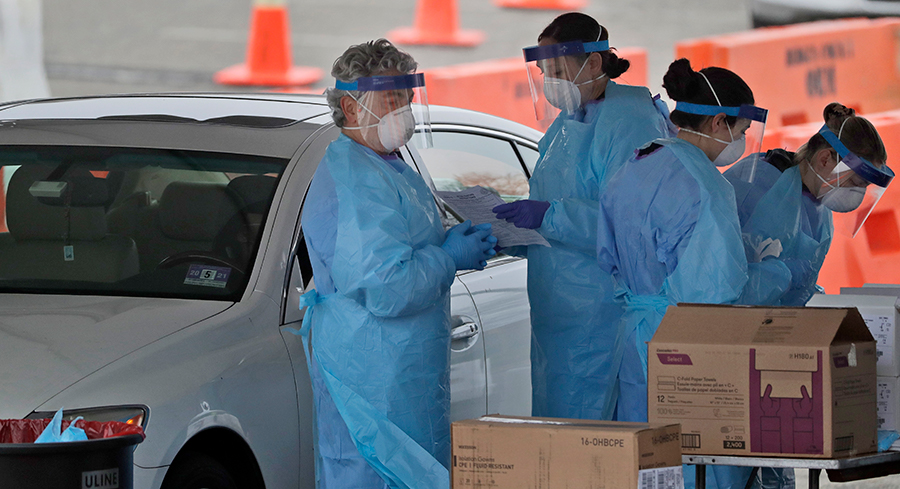 It’s one of many calls corporate executives have had to do with state and local officials over the last month as states from California to New Jersey shuttered their economies to prevent the spread of the virus. With the Trump administration taking a backseat to state leaders on coronavirus mitigation, companies and trade associations that traditionally rely on relationships with Washington power brokers are instead being forced to reckon with newly emboldened statehouse executives to deal with a fast-evolving commercial crisis.

“We definitely have this patchwork [of] states stepping in and stepping all over the commerce clause of the Constitution, and we’ve been dealing with those on a state-by-state basis,” said Bob Voltmann, president and CEO of the Transportation Intermediaries Association, which represents the lobbying interests of freight transportation logistics companies.

The states’ assertion of decision-making power over commerce is nearly unprecedented — and it hasn’t been pretty, from the viewpoint of many businesses. A melange of constantly shifting state-level directives and mandates, overlaid with legally precarious local ordinances, have left business leaders scratching their heads at what forms of commerce are “essential,” how they should manage their supply chains and, in many cases, how to meet the needs of angst-ridden customers.

“It’s like going to elementary school or high school and each teacher has their guidelines for when class ends or what they’re going to be studying. And the principal is saying, ‘We’re going to just leave it up to the teachers,’” said Ron Busby, president and CEO of the U.S. Black Chambers. “We just didn’t know what to tell [our members].”

Murphy, who once worked with Waldron at the banking powerhouse, confirmed Goldman’s compliance with New Jersey’s stay-at-home order last Wednesday during his daily coronavirus press briefing.

While the U.S. Department of Homeland Security offered guidance on March 19 for what businesses are essential and nonessential, that guidance emerged days after several Northeast states started shutting off the house lights on bars, restaurants and other retail operations.

Since then, governors haven’t exactly moved in lockstep. In Pennsylvania, Democratic Gov. Tom Wolf’s initial directive shut down critical elements of the manufacturing supply chain, a step well removed from orders in New York and New Jersey. Rest stops operating along the Pennsylvania Turnpike, a 360 mile-long byway that traverses the state, were closed and then reopened to accommodate truckers hauling supplies from the Midwest to the Northeast corridor.

Similar disruptions are likely to occur following directives like the one from Florida Gov. Ron DeSantis, a Republican, who has ordered travelers from New York, New Jersey and Connecticut — the current epicenter of the global coronavirus pandemic — to self-quarantine for 14 days after arriving in the state.

The order exempts people performing services related to the “military, emergency or health response,” but it’s unclear if that exempts those working for businesses deemed essential to the coronavirus response in other states.

“Our biggest enemy is fear and jealousy. So many sections of the economy have been sent home,” said Brian Turmail, vice president of public affairs and strategic initiatives for the Associated General Contractors of America, which represents construction interests across the United States. “There’s so much fear of the unknown. … It’s easy [for elected officials] to over course correct.”

Last week, the Business Roundtable, U.S. Chamber of Commerce and the National Association of Manufacturers wrote to the National Governors Association asking governors take a uniform approach on stay-at-home orders that designate which “essential business” and “critical infrastructure” can operate.

In Albany, after New York Gov. Andrew Cuomo shut down most businesses a little more than a week ago, entities ranging from car dealerships and golf courses to bike shops sought waivers deeming themselves “essential.” Earlier this week, Murphy had to augment New Jersey’s stay-at-home order to allow mobile phone retailers, feed stores and nurseries to remain open.

The volume of incoming requests from businesses seeking to be added to the list of essential businesses was “tremendous,” one Murphy official said, adding that the range of industries included everything from transportation companies to craft breweries.

“You’d get a lot of incoming once there was a word out that states were looking at stay at home policies,” said the official. “You get blasted. Everyone says they’re essential. ‘Look at this carve out. This other state did it.’”

While the NRF has continued to push for guidance at the federal level — which Straczewski says will help shape constantly evolving executive orders at the state level — reports from members about uneven enforcement of state and local shutdown ordinances forces local retail federations to circle back with the relevant officials for more cajoling.

“[State officials] don’t know who we are. And they’re thinking about their constituents first, which is what happens in a representative republic. … They want to do the right thing,” Voltmann said. “They see what other people are doing and they want to jump in and do the same.”

Theodoric Meyer contributed to this report from Washington.

END_OF_DOCUMENT_TOKEN_TO_BE_REPLACED

Owen Wilson Is The Latest Victim Of An Uptight, Anti-Spoiler Marvel

Marvel on YouTube It looks like he's taken the threats to heart, because he's tightlipped about everything when it comes to Loki season 2. END_OF_DOCUMENT_TOKEN_TO_BE_REPLACED

San Jose resident Ray Minter is calling for help from his local government after his California home has been crashed into by speeding drivers 23 times since 1972. END_OF_DOCUMENT_TOKEN_TO_BE_REPLACED