Biden looks for an infrastructure win where Obama and Trump failed

President Joe Biden will unveil a $2 trillion proposal Wednesday to transform America’s infrastructure over the next eight years, launching a mammoth legislative offensive to turn a long-running Washington punchline into a legacy-defining policy achievement in his first year in office.

Biden will travel to Pittsburgh where he will call for trillions of dollars in investments to rebuild the country’s roads, bridges and transit; improve access to clean water and broadband; expand access to elder and disability care and revitalize American manufacturing. Or, as the White House puts it, the plan would affect how we move, how we live at home, how we care for one another and how we manufacture.

If passed alongside an overhaul of the country’s corporate tax system, as Biden is proposing, the White House says it would be fully paid for within 15 years.

The sprawling package is the first part of what will be a two-pronged “Build Back Better” plan, the latter of which will include Democratic priorities on caregiving and improving wages for essential workers to be rolled out in mid-April.

Together, the initiatives constitute a core component of the president’s agenda, one expected to dominate the next several months as U.S. lawmakers debate its path forward. And pushing it through Congress will require Biden to pull off a second legislative victory — one that could either burnish his legacy or tarnish his record — just weeks after securing a $1.9 trillion coronavirus relief package without a single Republican vote.

It would also finally deliver on promises made by Presidents Barack Obama and Donald Trump, who both tried to deliver sweeping infrastructure plans during their years in the White House and failed due to broad political opposition to either raising taxes or adding to the national deficit.

“Rescue was just part of the economic challenge he ran for president to address,” a senior Biden administration official said during a press briefing Tuesday night previewing the plan. “Then recovery, and the work of building back better, could come not too soon.”

Under the infrastructure umbrella, the plan reflects several of Biden’s major priorities, including combating climate change and dedicating aid under certain programs to disadvantaged communities to help narrow inequality.

The climate aspects include a call to end fossil fuel subsidies — a step that progressive Democrats have long been pushing for — and a $174 billion investment in vehicle electrification, which would involve at least 20 percent of school buses and the entire federal vehicle fleet. It would also target 40 percent of the benefits of its investments in clean infrastructure and climate to disadvantaged areas.

Some of the investments in research and development would also be aimed at eliminating racial and gender inequities — including by, for example, reserving some research funding for historically Black colleges and universities.

And the $620 billion for transportation infrastructure is envisioned to be a massive cherry on top of a normal reauthorization of road, rail and transit programs that needs to be completed by the end of this fiscal year and could itself total up to $500 billion.

“The American Jobs Plan is really about focusing on how can we make a historic capital investment in America to improve our competitiveness, create millions of jobs, rebuild our infrastructure and position our economy to face the crises and the threats we’ll face in the future,” the administration official said, “and finally address the climate crisis as a nation.”

While the White House scored an early victory on its American Rescue Plan, the legislative path forward for Biden’s next set of priorities is already laden with political landmines. The president will have to muscle it through a Congress that’s nearly evenly divided, where consensus even on smaller, more mundane matters is hard to come by.

And he’ll have to navigate a growing set of strict and often conflicting demands from members of both parties, hoping to satisfy progressive Democrats who want trillions more in investments paid for with a variety of tax hikes, as well as at least some Republicans — who so far are opposing any new levies and are questioning whether another gigantic round of government spending could overheat the economy and curb growth.

Republicans in Congress have been warning for weeks that in order to get their support, an infrastructure plan will have to be restrained in size and scope, not laden with too many climate initiatives, and that it should be paid for.

This plan will clearly miss that mark. Republican Sen. John Barrasso of Wyoming has already called it “a Trojan horse for more liberal spending & higher taxes.” It’s getting pushback from the left, too, with Rep. Alexandria Ocasio-Cortez (D-N.Y.) tweeting that the package is “not nearly enough” and “needs to be way bigger.”

At the same time, however, the bill nods to the political realities of Capitol Hill — and especially the Senate, where two West Virginia senators will have outsized sway over its fate. One, Democrat Joe Manchin, is the deciding vote on nearly everything the Senate does and has already indicated his desire for an “enormous” infrastructure bill, paid for with tax increases. The other is Shelley Moore Capito, the top Republican on the committee that is writing the Senate’s infrastructure bill. For them, Biden’s plan includes money for cleaning up abandoned mines in coal country.

Many Democrats on Capitol Hill ultimately expect Biden’s two-pronged infrastructure initiatives to pass through reconciliation, meaning party lawmakers won’t need any Republican support. But so far, at least, the White House has been vague on its legislative strategy for passing the bills and is looking to pick up at least some GOP votes.

The administration has been dispatching Transportation Secretary Pete Buttigieg to Capitol Hill to woo lawmakers from both parties, and Biden has invited both Republican and Democratic lawmakers to White House huddles on the plan. Brian Deese, who leads the White House National Economic Council, and Louisa Terrell, who leads the legislative affairs office, also briefed members of both parties on Tuesday on the details. 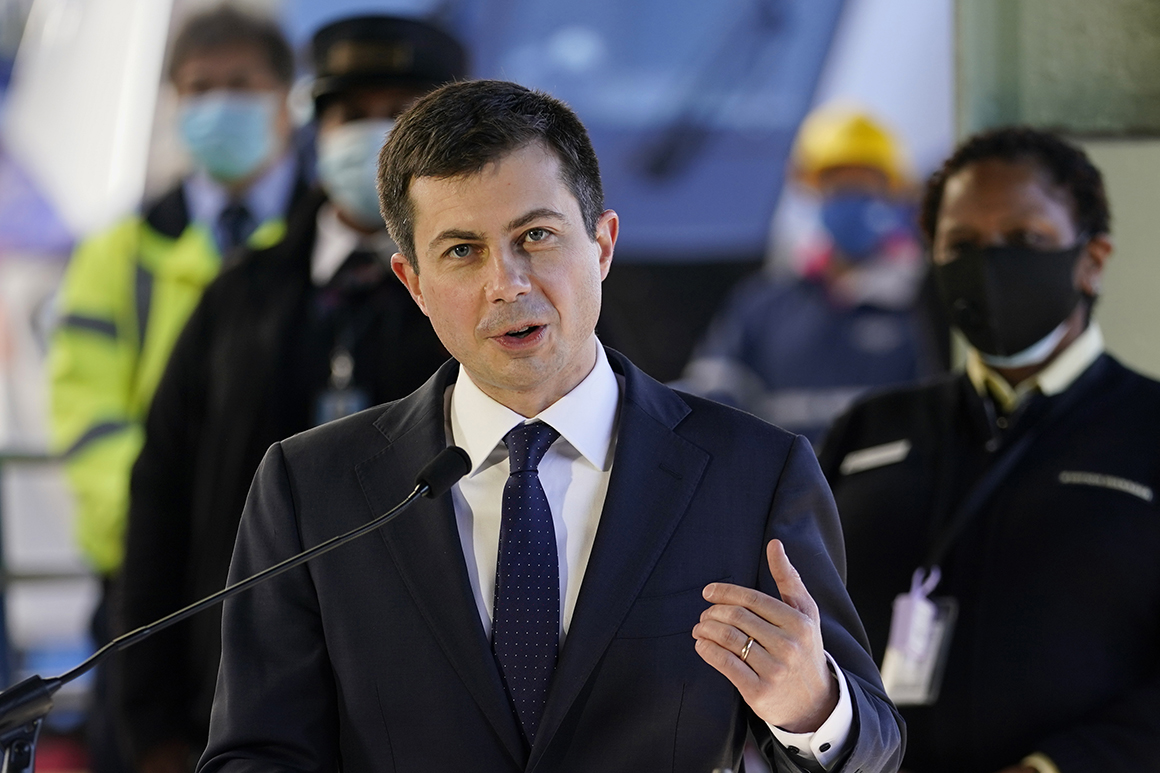 Some aspects of this first package reflect that bipartisan goal. It focuses heavily on investments in hard infrastructure and transportation, for example, which has long garnered bipartisan support, rather than including some Democrats’ more progressive goals that are expected to be included in the later package — such as making the expanded child tax credit permanent, investing in child care and making community college tuition free.

The White House is also presenting it as a plan that is fully paid for, at least over 15 years, and includes tax hikes only on corporations, rather than on wealthy individuals. The proposed corporate tax hike would only reverse a portion of the Trump administration’s tax cut on businesses, raising it from 21 percent to 28 percent, while strengthening the global minimum tax on multinational corporations.

And Biden officials are emphasizing that they will welcome lawmakers’ feedback and input on how best to address their priorities, while noting that Biden will not compromise on “the urgency of the moment” and “the need to really deliver.”

“Our hope is that the elements of this investment package are places where we have seen a lot of enthusiasm in the past to make progress,” the administration official said. “They are issues that have broad support among the American people, and there has been a lot of eagerness to move in Congress on them as well.”

END_OF_DOCUMENT_TOKEN_TO_BE_REPLACED

November is usually the end-boss of the gaming calendar, a month where the biggest blockbusters of the industry fight it out for the attention and wallets of gamers right before the festive season commences. And while this upcoming November may not be as big a... END_OF_DOCUMENT_TOKEN_TO_BE_REPLACED

Health secretary says move will boost NHS staff vaccine uptake; Poland in grip of fourth Covid wave says health ministerUK ministers are set to intensify the Covid vaccine booster rollout amid a media blitzCovid shots for kids five to 11 will to be available i... END_OF_DOCUMENT_TOKEN_TO_BE_REPLACED

What Biden is keeping secret in the JFK files

Opinion | The Supreme Court Has a Branding Problem. Here’s One Way to Fix It.

Roy Blunt: Trump should look ahead, not back