Why Togo Is the Instagram-Friendly Couch of Quarantine

There is a lumpy sofa from the 1970s that now dominates Instagram feeds with the same omnipresence as artfully arranged Vitsoe shelves, grayscale Wassily chairs, and tiny wooden stools, to name a few of the platform’s other recent trends. It lacks the minimalist austerity that we are used to seeing in the more design-centric corners of the Internet. But much like precise German shelving and primitive teak, Michel Ducaroy’s Togo furniture line — a modular collection of sofas, loveseats, accent chairs, and ottomans that was designed in 1973 and produced by French manufacturer Ligne Roset — has a look that is both alluring and scroll-stopping.

The Togo isn’t like other couches. Its low-to-the-ground design is defined by a distinct curvature and sunken profile. Indented lines and ruffled crevices cover the wonky, crumbled silhouette like a slightly deflated balloon—it’s Brutalism in a couch. The funky misshapenness is all part of the line’s appeal, though. These messy parts still add up to a piece of furniture that is visually appealing and physically inviting—particularly during the pandemic. Twenty- and thirty-somethings have fallen for the vintage puffy seating with newfound zest, turning it into social-media eye candy.

“For some people, especially the younger set, it almost feels like an adult bean bag,” says Andrew Bowen, a partner at Ash NY, a New York–based design firm. Bowen says the Togo has been weaving in and out of trendiness since the turn of the millennium. However, the dense ergonomic sofa has become newly popular in our moment of enforced coziness. It appeals to the part of our brains that just wants to lounge on a couch and ignore the chaotic world swirling outside our windows. 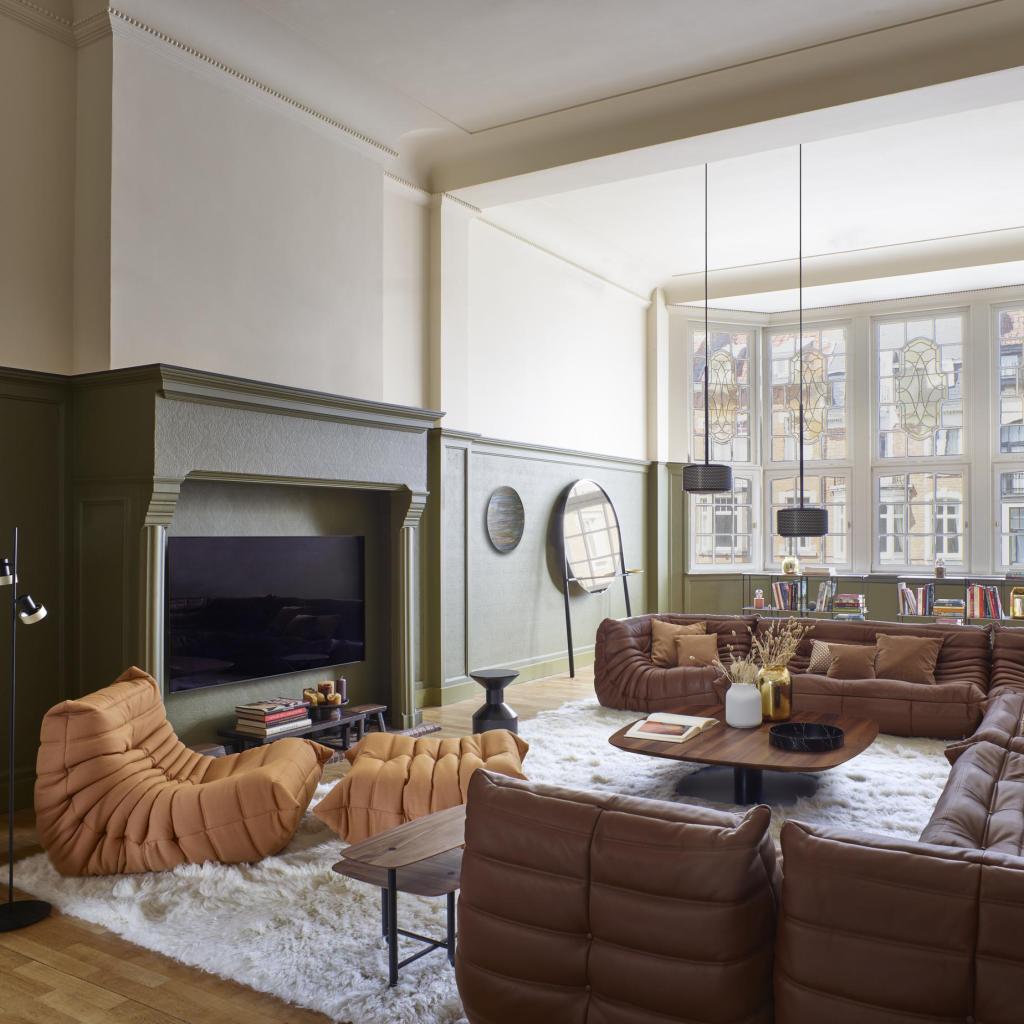 Home Union, a trendy vintage furniture boutique in the Williamsburg neighborhood of Brooklyn, recently posted a Togo chair and ottoman in a rich chocolate brown. “Wow,” commented the supermodel Bella Hadid, a seeming reaction to seeing the design in real-time. When Alyssa Coscarelli, a freelance fashion writer and style influencer, moved to Los Angeles, she made the Togo the focal point of her new living room. It even landed a recent blurb in the trendy Off-Duty section of the Wall Street Journal. The Togo has become a lifestyle prop, appearing next to Monstera plants and quirky gallery walls in the perfect millennial moodboard or as a backdrop to show off Prada heels and pants from the popular designer Marine Serre.

When I emailed Berlin-based journalist and influencer Brenda Weischer about her Togo loveseat, she declined to be interviewed for this story but replied with a note: “I knew it was over when I saw my living room in a post of an account called ‘shit bloggers post.’” Weischer’s Togo is precisely styled next to stacks of books on the floor and a text-heavy Supreme skate deck—a tableau that might now qualify as the aspirational cliche of 2021.

Part of the appeal of the Togo is that it adapts to multiple stylistic modes. It can be dressed to look minimalist or maximalist, bohemian or industrial. “It is not as simple as a Jean Prouvé chair,” Bowen explains. “If it’s leather, it feels like one thing; suede makes it feel like something totally different. If it’s in a bold color, it’s a completely different world. The Togo is a chameleon in that sense.”

Ducaroy, who passed away in 2009, was born into a family of designers and furniture makers. After graduating from Ecole Nationale des Beaux-Arts, he jumped straight into the family business. It wasn’t until 1952 that Ducaroy branched out on his own, eventually signing a contract with the furniture manufacturer Ligne Roset. It would still be nearly 20 years before he came up with the Togo line. Some of his earlier designs were the Adria and Kashima sofas, which both had low-sitting profiles that hinted at the relaxed style that would soon define the Togo. None of Ducaroy’s earlier designs gained the Togo’s lasting appeal, however. The line is still in production at Ligne Roset to this day.

“I think the Togo activates a certain coziness and nostalgia that very few other sofas can do,” says Bowen. “It sort of wraps you like a glove; it is very low to the ground. It feels informal, but it is a very important piece of furniture design.” It also brings to mind the similarly iconic Eames lounge chair, which was indeed modeled on a broken-in baseball glove by its designers.

For all its of-the-moment, influencer-approved rise, it is worth noting the Togo has been beloved by the design-minded for years. The late writer and tastemaker Glenn O’Brien had a tangerine-colored Togo in his modernist home in West Cornwall, Connecticut. The Finnish-Canadian post-Pop artist Fucci has one in his home-slash-studio, and the sofa has even made an appearance in a painting or two. A brown leather Togo maintains a regular presence in the background of the near-daily Instagram Story diaries of the character actor Adam Goldberg.

The price of an authentic Togo leaves it out of reach for most buyers. The three-seat sofa is priced at $6,270 and the loveseat at $4,800, while the entry-price chair alone starts at $3,355. Several websites offer replicas with prices starting at a much more palatable $1,300. These copies are certainly fueling the Togo’s saturation. Replicating a lumpy cushion might not be as difficult as nailing the curvature and exact woodgrain of an Eames lounge, for example.

As unique as the Togo is, however, the cycle of influencerdom and algorithmic copycatting has resulted in a certain blandness. We might already be past peak Togo for this cycle, at least.

There is a sameness in how it is being styled today: usually on top of a mass-produced geometric rug, often with artfully stacked books or the warm glow of a Noguchi lamp. The #TogoSofa hashtag on Instagram reveals dozens of photos in this vein. The template has been set, and the look feels easy to replicate; it is interior design as paint-by-number. For someone looking to refresh their living room in a year where sweatpants and comfortability reign supreme, it feels like an obvious choice. As Bowen mentioned, the Togo is a chameleon, a quality that is being shamelessly exploited as influencers post sponsored content and discount codes to purchase knockoffs.

The Togo was born as an off-kilter sofa with weird coziness and an aggressive, design-heavy attitude. Today, it feels as if it has lost that idiosyncratic edge, where it once wanted to be covered in a green checkerboard print like this 1970s print ad or plopped in the sun-drenched corner of an actual studio space. The odd spirit of the Togo will likely persist past its current popularity. Considering all the forgotten furniture styles of many beloved designers, though, Ducaroy would probably rather see his dear Togo become a cliche in 2020 than watch it fade out entirely.