Vaccine Flair Could Be the ‘It’ Accessory in Restaurants This Summer

Enamel pins are a tiny, trendy way to let diners and workers know you’re safe when you no longer need your mask

For over a year now, face masks have been more than just a highly effective way to curtail the spread of a highly contagious disease. They’ve become a signal of sorts, a way to instantly identify fellow citizens who actually give a shit about protecting themselves and others from COVID-19. Now, thanks to the incredibly effective vaccines available to everyone over the age of 12, many of those caring people no longer need masks to keep safe. But with our masks off, how are we supposed to know whether the unmasked people near us — say, an unmasked server approaching a table of unmasked guests — are vaccinated or not? The signal is starting to get jammed: What are we telling one another now?

Restaurants, which were among the first targets of local shutdowns and where countless workers have lost livelihoods and lives in this pandemic, have been the locus of our anxieties from the beginning. Diners were placed in a preposterous position of responsibility, forced to make a false choice between “saving the industry” or risking the spread of infection to support it. Now restaurants are once again poised to be places where we work through the current moment of pandemic norms, as restaurateurs face tough choices. They must decide whether to permit vaccinated workers and diners to unmask; whether or not to verify employees’ and diners’ vaccine status or just allow self-reporting; and whether or not they want to make that clear to the dining public. Some restaurant operators, workers, and diners are opting into the latter category by relying on a small vaccine pin. It could very well become the hottest dining accessory of the summer.

The first restaurant I saw using pins to demonstrate workers’ vaccine status was Souvla, the popular San Francisco Greek rotisserie chainlet, which announced the move on Instagram in early April. The restaurant group has always been savvy about merchandising, serving up Greek soft-serve yogurt in branded versions of the iconic “we are happy to serve you” paper coffee cup. With the vaccine pin — which features six check marks on a rotisserie skewer, in a play on the restaurant’s logo — owner Charles Bililies is hoping to offer a “subtle visual cue for the teams and guests to say ‘I’ve been vaccinated’” without having to shout it out.

The pins were initially designed to represent the restaurant’s COVID safety checklist; but in March, when California hospitality workers became eligible for vaccination, Bililies and the senior leadership team at Souvla had the idea to make the pin a limited-edition run and offer it to staff as they got their vaccines. It’s not mandatory — “This isn’t Office Space, you’re not required to wear flair,” Bililies says — but he says the staff has been really excited about the pins, with front-of-house workers adding it to their aprons and back-of-house workers adding it to their hats. “I hope it becomes a bit more prevalent in any sort of restaurant or retail environment.”

I do too. As someone with a child too young to vaccinate or mask, seeing more people proactively acknowledging their vaccinated status would give me tremendous peace of mind, especially as cities drop mask mandates per the latest CDC guidance. Some folks’ medical conditions make vaccination impossible, while other conditions make the vaccines less effective. For people who still need additional protection from COVID-19, and for anyone who wants to be cautious, not knowing doesn’t cut it when they’re considering eating and drinking, an activity that by its very nature precludes masking. I still want to know that the people around me are taking the community’s health seriously. And I want them to know that I do, too.

According to the pin makers I’ve spoken with, business is booming. Seattle-based Etsy vendor Nicole Santiago says COVID vaccine pins like hers are becoming bestsellers across the site. She attributes their popularity to people’s pride and excitement around being vaccinated. “I think people are ready to go out and dine with friends, and they want people like restaurant workers and bartenders to feel safe around them.” The pin, as she puts it, is “my flair to let them know I’m safe.”

Not surprisingly, consumer interest in vaccine pins started picking up in December 2020 as the first wave of health care workers were getting their shots. Although Pennsylvania-based Dissent Pins started off in 2017 by selling Ruth Bader Ginsberg collar pins, founder Nick Jehlen says the company has sold its “thanks, science” syringe pin for more than two years, with 50 percent of profits going to Voices for Vaccines. He noticed that after the December 2020 holidays, when sales would normally trail off, the numbers looked more like Black Friday, thanks to the “thanks, science” vaccine pin. In January 2020, the company launched COVID-specific vaccination pins, and has sold thousands a week since.

“People are ready to go out and dine with friends, and they want people like restaurant workers to feel safe around them.”

Massachusetts-based illustrator Nate Duval created his distinctly groovy “happy vax” pin with front-line workers in mind. Duval, who’s been making pins and other merchandise for 10-plus years, thinks of pins as “bumper stickers you wear. They show your personality. They’re flair.” He sees vaccine pins as something practical for health care workers to show patients that they’ve been vaccinated. After an initial wave of sales when the pins launched two and a half months ago, Duval says with wider vaccine eligibility and availability, the pins are more popular than ever. He sells hundreds a day, and many orders are for six or more pins, presumably group orders on behalf of work teams and families, and to give as gifts. “It’s the most popular item I’ve ever made in my life,” he says.

Duval gets the sense that those larger orders are coming not from official representatives of a business, but rather from staff members who want to get pins for themselves and their coworkers because of the nature of their job. He mentions a message from a Starbucks worker in South Carolina who bought a dozen pins for fellow baristas: “Anyone whose job requires them to be near people, this [pin] helps with the limbo we’re in where masks aren’t needed, but it’s an honor system.”

The limbo also puts restaurateurs into murky waters when it comes to visually indicating which employees have been vaccinated, opening the door for potential discrimination. Attorney Brian Klein points to guidance from the Equal Employment Opportunity Commission, which makes it clear that employers are legally allowed to ask for vaccination status — and can even take it a step further and mandate it, as long they make accommodations for employees who can’t get the shot due to a protected reason, such as a sincerely held religious belief or a disability. Klein, who practices employment and labor law and works with hospitality and restaurant groups in the New York City area, notes that once employers just know, let alone visually mark, which employees have been vaccinated, it opens up the possibility of creating a sort of second-class citizen status (or just creating the perception of different treatment) for those employees who aren’t vaccinated.

“People are doing stickers, wristbands; or if you have a policy where vaccinated individuals don’t have to wear a mask,” he says. “Are you as an employer shining a spotlight on someone’s religious beliefs or disability?” While vaccine status isn’t a legally protected class, disability and sincerely held religious beliefs are. And discriminating against protected classes is illegal.

On the flip side, Klein empathizes with an employer’s desire to let customers know that the staff is vaccinated, and suggests that many operators will say their employee handbooks and anti-harassment training provide sufficient guardrails to ensure that no discrimination will happen. Keeping vaccine flair optional is one way operators might avoid potential discrimination claims, but for now, Klein generally thinks the most cautious course of action is to just keep all employees masked. That takes this particular potential for discrimination off the table and keeps everyone safe.

There just isn’t a rule book dictating how to navigate this moment of mixed vaccination status and changing mask mandates. Due to the in-person nature of restaurant work, operators are going to have to figure out the balance between keeping workers and guests safe while making sure that discrimination against protected statuses like disability and religious belief does not happen. “Restaurants are always going to be incubators for these kinds of policies,” says Klein.

Given some of the potential drawbacks to publicizing workers’ vaccine status, I suspect it will take more time before pins for workers become totally widespread; some operators are too risk-averse to give it a try.

But there’s nothing holding diners back. I ordered my pin (I went with Duval’s) and plan on wearing it out to restaurants, bars, and grocery stores once California drops its mask mandate on June 15. Thanks to flair, masks don’t have to be the way to show you give a shit this summer. A shot and a pin work, too.

END_OF_DOCUMENT_TOKEN_TO_BE_REPLACED

Enter our giveaway, and you’ll automatically be eligible to win a Greenpan Canterbury Ceramic Nonstick 10-Piece Cookware Set. You can enter up to two (2) times per e-mail address per day. Deadline 7.10.21. END_OF_DOCUMENT_TOKEN_TO_BE_REPLACED 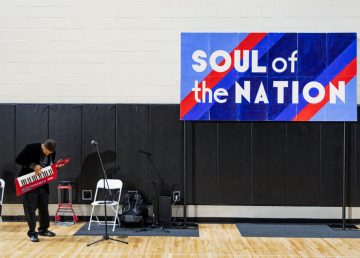 Before the South Carolina Democratic primary, many in elite political circles were writing the Joe Biden campaign’s obituary. And they were enjoying it.Political cycles love stories of trajectory: an improbable rise or a tragic fall. Coasting lacks sizzle. A c... END_OF_DOCUMENT_TOKEN_TO_BE_REPLACED

Win A Copy of The Unofficial TikTok Cookbook

Everything Eater Editors Have Cooked in 2021