They Lost Medicaid When Paperwork Was Sent to an Empty Field, Signaling the Mess to Come

BELFAST, Tenn. — Three years ago, Mason Lester, a rambunctious toddler, tumbled off his family’s porch and broke his wrist. His mother, nine months pregnant, rushed him to a nearby hospital, where she made a confounding discovery: Their health insurance had vanished.

Alarmed, Katie Lester called the Tennessee Medicaid agency, TennCare, which had covered her during a prior pregnancy and insured Mason since the day he was born.

TennCare said they were no longer enrolled because the family failed to respond to a packet of essential paperwork. But Lester hadn’t seen the packet, nor a termination letter. Years would pass before it became clear what went wrong: Due to a clerical error, TennCare had mailed both to a horse pasture.

The loss of Medicaid was catastrophic for the Lesters, an impoverished family that owns a small lawn-cutting business in Belfast, a town of 600 about an hour south of Nashville. Lester and her husband appealed TennCare’s decision but were rejected. They reapplied and were denied after mailed paperwork once again failed to reach their home. The Lesters said they were left uninsured for most of the next three years, during which the coronavirus, injuries, and a cesarean birth buried them under more than $100,000 of debt, which savaged their credit and dashed plans to buy their first home.

“It was like we just got run over by a bus when I found out we didn’t have insurance,” Lester said.

The Lesters’ story may be a warning of what’s to come for many poor Americans. Because of the covid-19 public health emergency, TennCare and Medicaid programs in other states largely have been barred from dropping anyone, and Medicaid enrollment has swelled to historical highs. But when the emergency is declared over, states will once again require families to prove they are poor enough to qualify for coverage. Millions are expected to lose their insurance in the year that follows, including countless people like the Lesters who meet the requirements for Medicaid but get lost in its labyrinthine bureaucracy.

“People are falling through the cracks. And we need something there to catch them before they are swallowed up in the abyss.”

Waverly Crenshaw Jr., chief judge of the U.S. District Court for the Middle District of Tennessee

Problems with the verification process have long shadowed TennCare, an agency that prides itself on keeping enrollment small and spending lean. State officials have for years been criticized for requiring Tennesseans to navigate a thicket of paperwork. Prior investigations of TennCare revealed that most people are dropped because of incomplete or unreturned forms. As few as 5% of those dropped are found to be ineligible.

Thirty-five TennCare members challenged its “defective” renewal process in a class-action lawsuit in 2020, and the ongoing case recently added plaintiffs, including the Lesters. The lawsuit accuses TennCare of befuddling its members with vague and contradictory instructions; demanding information it already has or does not need; ignoring the info that members provide; improperly rejecting termination appeals; and, sometimes, sending essential paperwork to addresses that it “knows, or should know,” are wrong.

“The state’s focus is on trying to find someplace where a family tripped up, rather than on ensuring that the process accurately enrolls families who are eligible,” Johnson said.

The lawsuit asks a federal judge to order TennCare to reenroll about 108,000 people who were dropped in the 12 months before the pandemic emerged and maintain their coverage until and unless the agency can prove they do not qualify.

That language has appeared in TennCare letters since at least 2015, including during a period when hundreds of thousands of Tennesseans were cut from its programs, according to TennCare documents obtained by KHN.

“People are falling through the cracks,” the judge said. “And we need something there to catch them before they are swallowed up in the abyss.”

Soon those cracks will widen. 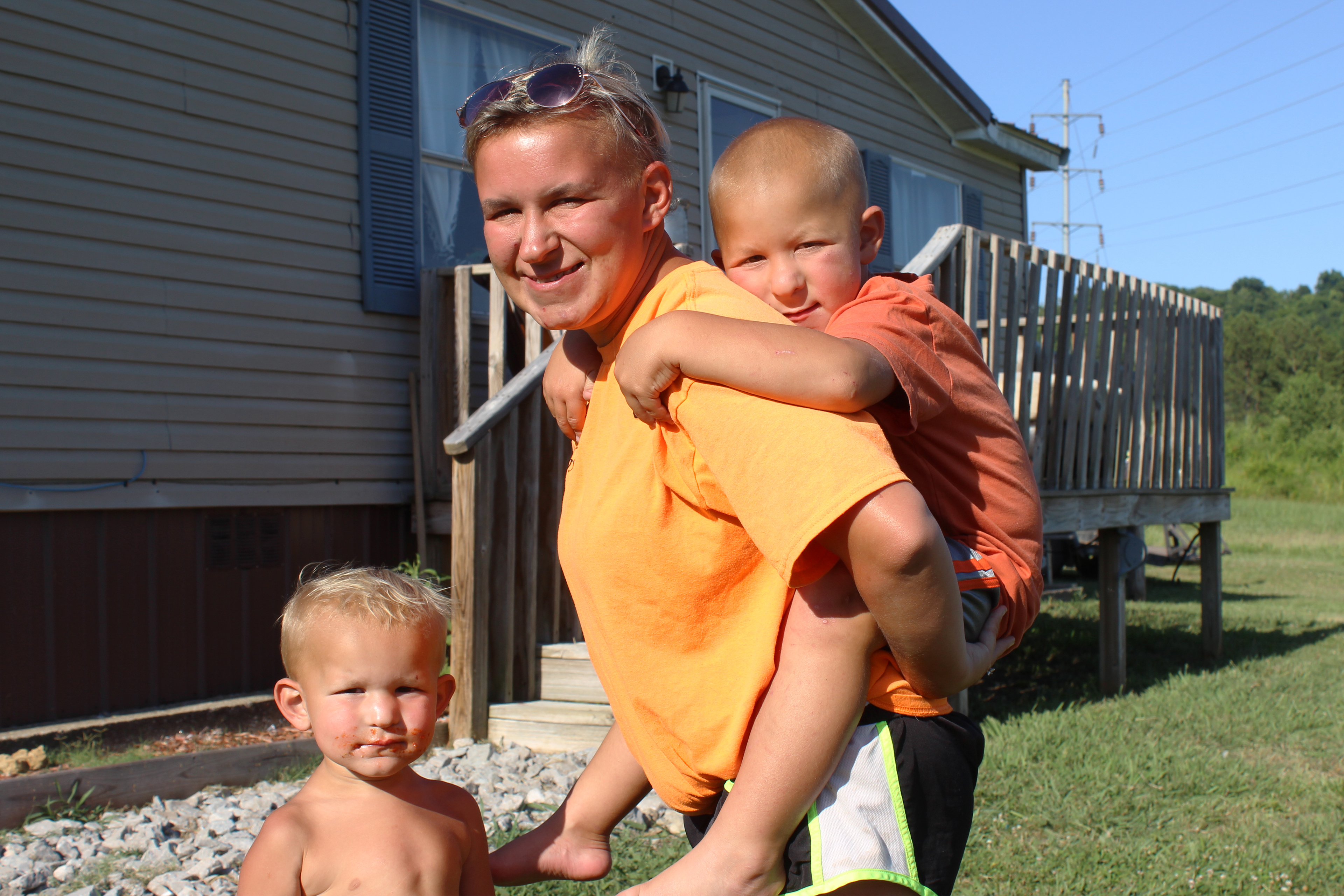 The federal public health emergency is set to expire in October, and Medicaid programs across the country are poised to once again ask families for proof of income. TennCare estimates the renewal process will prune enrollment back to a pre-pandemic level of about 1.4 million members within a year, which means about 300,000 people will leave or be dropped.

Johnson said the looming end of the federal emergency gives the class-action suit “greater importance” even though it is focused on the 108,000 people who were dropped between March 2019 and March 2020.

“We would not expect the state to fix the problems just for the 108,000 and yet leave the defective process in effect for everyone else,” Johnson said.

TennCare officials declined to be interviewed for this story or answer questions about the lawsuit or the appeal information in its termination letters.

In response to emailed questions, agency spokesperson Amy Lawrence said that TennCare is “continually improving the eligibility process” but that members are responsible for keeping their addresses up to date and responding to any renewal paperwork.

When the federal emergency ends, TennCare expects to automatically renew at least half of its members using readily available electronic data, then will send paperwork packets to the rest — as many as 850,000 people — over the next year, Lawrence said.

TennCare members have been here before. It was messy.

TennCare renewals were paused in 2014 so officials could focus on implementation of the Affordable Care Act. TennCare grew by more than 350,000 people before renewals resumed and many were disenrolled.

A 2019 investigation by The Tennessean newspaper revealed that a sliver of those people were found to be ineligible for TennCare before they were dropped. A government audit affirmed this finding: Of more than 242,000 children cut from TennCare from 2016 to mid-2019, only 5% were determined to be ineligible for coverage.

An additional 66% — or about 159,000 kids — lost their insurance because TennCare said their families did not respond to renewal paperwork or provide enough info on that paperwork, according to the audit.

One of those families was the Lesters, who lost their coverage in May 2019. Documents provided by the family and filed in their lawsuit show their packet of TennCare paperwork was first mailed to a house where the Lesters had lived on and off. The packet was returned to TennCare as “undeliverable,” then erroneously re-mailed to a horse pasture next to a relative’s house, then returned to TennCare again.

In other words, the Lesters did not complete the paperwork because they never saw it.

And TennCare knew it.

TennCare also mailed the Lesters’ termination letter to the horse pasture, which is why the family did not realize Mason was uninsured. Lester filed an appeal, but TennCare rejected it as “untimely,” according to a TennCare court filing. Lester filed a new application, but TennCare denied it, the filing states.

In June 2019, Lester gave birth to another son, Memphis, while still trying to convince TennCare they should qualify for Medicaid.

“Hours after having a baby, still doped up in my hospital bed, I was getting in my email, trying to find proof of income to get them everything they needed,” she said.

In 2020, while still uninsured, Lester contracted covid and required hospitalization for two days, she said. The following fall, Memphis stepped on a shard of glass and needed surgery, then soon afterward was hospitalized for a week with covid and respiratory syncytial virus, or RSV, his mother said. Weeks after that, in October 2021, Mason stumbled in the yard and shattered another bone.

This time, hospital staff reenrolled Mason in TennCare in a “presumptive eligibility” category, according to the family’s lawsuit. TennCare covered Mason for about four months before dropping him again.

One month later, in April, the Lesters connected with the Tennessee Justice Center, which finally discovered the clerical error that steered their TennCare paperwork to the horse pasture.

The Lesters joined the center’s lawsuit the following month, and weeks after that TennCare approved coverage for the whole family, saying in a court filing that eligibility was affirmed through the discovery process. The coverage is retroactive to 2019, so it should erase much of the Lesters’ medical debt.

But TennCare defends its initial decision to drop the family, arguing they were “appropriately terminated” for failing to complete renewal paperwork. Kimberly Hagan, the agency’s director of member services, said in a court filing that the Lesters’ problems were “entirely attributable to the failure of the U.S. Postal Service,” which was not delivering mail to the Lesters’ home and gave TennCare an “erroneous forwarding address.”

“While this is an unfortunate set of circumstances, it was not of TennCare’s making and in no way reflects a systemic issue with TennCare’s eligibility reverification and redetermination processes,” Hagan said.

Hagan also said the Lesters could have obtained the lost paperwork by logging in to TennCare’s web portal, TennCare Connect. The portal, part of a $400 million modernization of TennCare, launched about two months before the Lesters’ problems began in 2019.

The lawsuit also unearthed concerns that families cut from TennCare may have been misinformed of their right to appeal before an impartial official, also known as a “fair hearing.”

KHN obtained copies of two TennCare templates for termination letters, dated 2015 and 2017, that both contain this language. It was also included in a letter sent to the Lesters.

Crenshaw, the federal judge, said on March 4 that this language “misleads” because people are entitled to a hearing if they believe TennCare made a mistake in “the application of [their] facts to the law.” TennCare has been telling them otherwise, the judge said.

“At a minimum, it frustrates their due process rights,” he added.

An example of a mistake involving “the application of facts to the law” would be TennCare accurately denying someone coverage because their income is too high but failing to consider them for another kind of coverage with a higher income limit.

Johnson, the head of the Tennessee Justice Center, said “many of the mistakes” made by TennCare are like this. In 2019 the agency failed to consider applicants for seven eligibility categories, each of which allows for different income levels, she said.

TennCare denies that its letters were misleading but said in a new court filing that they have been “voluntarily modified” to exclude this language.

END_OF_DOCUMENT_TOKEN_TO_BE_REPLACED

DOJ Started Getting Serious About Jan. 6 Higher Ups … In May

A lot of things happened. Here are some of the things. This is TPM’s Morning Memo. Better Late Than Never?... END_OF_DOCUMENT_TOKEN_TO_BE_REPLACED

The Creemee Is the Ultimate Taste of Vermont Summer

Haunted for 13 Years by Debt From Childbirth, Then Rescued by a Nonprofit

Some Rural Hospitals Are in Such Bad Shape, Local Governments Are Practically Giving Them Away

Her Brother Landed in a Nursing Home. She Was Sued Over His Bill.

Sleepless Nights Over Her Children’s Future as Debts Pile Up