‘There is no surge plan’: Despite warnings, Congress failed to fully fund pandemics bill 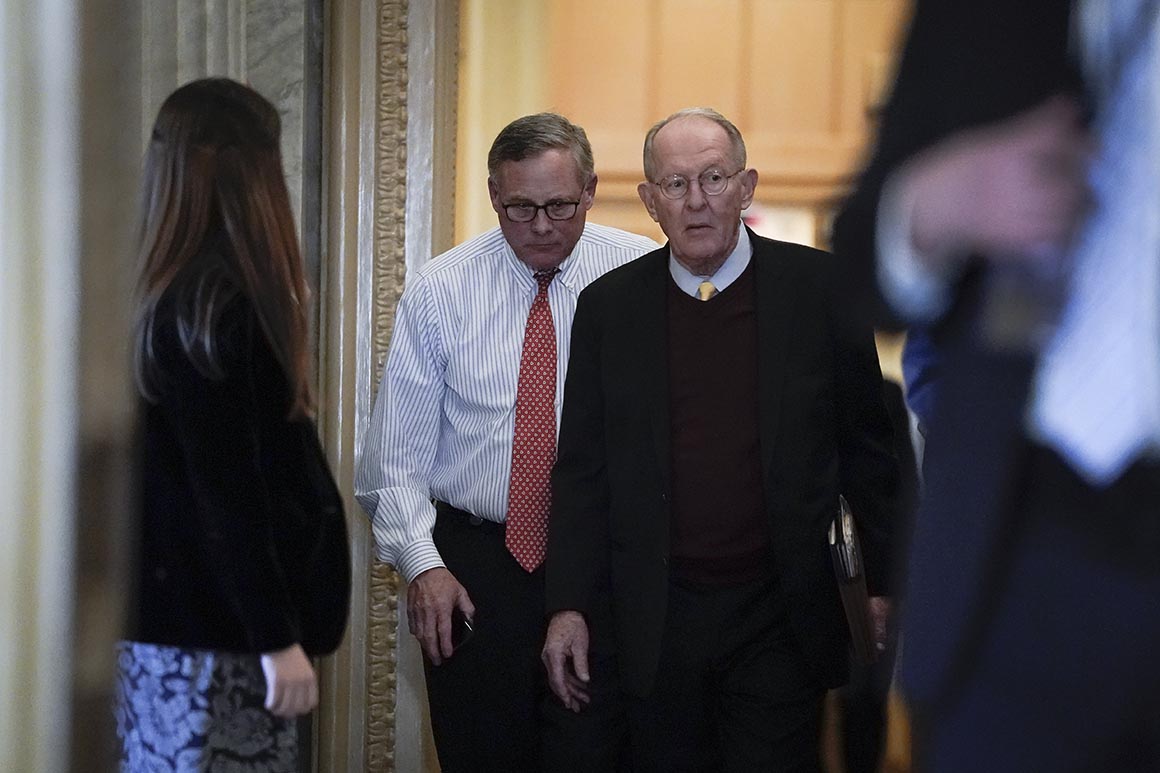 Public-health experts trooped to Capitol Hill in 2018 and 2019 to ask Congress to invest hundreds of millions of additional dollars in the Pandemic and All-Hazards Preparedness act, testifying that many of the programs created after 9/11 to ready the nation’s health system for any kind of disaster had since been stripped down to dangerously low levels.

“The nation is not ready to provide medical care in large catastrophes or big epidemics of contagious disease,” Tom Inglesby of Johns Hopkins University warned the Senate HELP Committee. “There is no surge plan for taking care of larger numbers of patients with contagious, potentially lethal infectious diseases.”

Dr. Umair Shah, the former president of the National Association of County and City Health Officials, testified in the House’s hearing on the bill that “ a precipitous decline in funding year after year” has crippled local health departments ability to handle a pandemic.

“Cracks will show and forces will penetrate and overwhelm the offensive line that protects the public’s health,” he predicted.

The warnings were not heeded.

Rather than appropriate the advised $820 million-plus for public health grants and $470 million-plus for hospital preparedness that fell under the 2019 pandemic act, Congress only agreed to spend about $675 million and $275 million, respectively. Lawmakers, public health experts and Capitol Hill staff told POLITICO it’s well in keeping with Congress’ pattern of chipping away at domestic spending when times are good and only loosening the purse strings once a crisis is already underway.

“We’re the richest country in the world and, in many ways, we were caught with our pants down,” lamented Rep. Robin Kelly (D-IL), who sits on the House subcommittee that crafted the bill. “If we had had more money, we would have been more prepared today. We would have gotten up to speed faster.”

The bill’s reauthorization and subsequent funding allocation are among several key moments over the last few years where experts warned of the likelihood of something like current pandemic and government leaders did not do enough to prepare.

“We have a tendency to do this,” said Dr. Georges Benjamin, the executive director of the American Public Health Association. “When something happens, we throw a lot of money at it, but then we walk away. If we did that with the military, we’d be in terrible shape. But, somehow, we are fine doing that with public health.”

Lawmakers and outside experts alike say the bill renewed and improved on crucial public health programs that the country is now depending on as the pandemic spreads.

Among other provisions, the legislation — officially known as the Pandemic and All-Hazards Preparedness and Advancing Innovation Act — encouraged the FDA to work with companies to develop emergency use authorizations for new vaccines. It also clarified when and how the Public Health Emergency Fund could be tapped, and set up pilot programs to help states and hospital systems create regional cooperation plans. Lead Senate author Richard Burr (R-N.C.) and HELP Committee Chair Lamar Alexander (R-Tenn.) hailed the bill in an op-ed this February as the backbone of the country’s ability to weather the coronavirus pandemic.

“The public health preparedness and response framework that Congress has put in place and that the Trump Administration is actively implementing today is helping to protect Americans,” the senators wrote. “The work of Congress and the administration has allowed U.S. public health officials to move swiftly and decisively in the last few weeks.”

An HHS spokesperson praised the bill as well, saying in a statement to POLITICO that it “strengthens public health and healthcare readiness, bolsters response and recovery programs, and increases transparency.”

Public health experts agree that the underlying policy was good, but say Congress’ failure to then adequately fund these programs is exacerbating the current crisis.

“While we’re lightyears ahead of where we were in 2001 – in terms of incident command, laboratory capacity and other preparedness measures – there’s been a steady chipping away at the funding that has made a difference in how quickly public health departments can ramp up,” said Dara Lieberman with the Trust for America’s Health, one of the groups Congress invited earlier this year to weigh in on the response to coronavirus.

Since some of the bill’s key health programs were first created in the early 2000s, their funding has been slashed significantly in the intervening years — under Democratic and Republican administrations alike and across several Congresses.

The Public Health Emergency Preparedness program’s funding has gone from about a billion dollars in 2003 to $675 million this year, while the Hospital Preparedness program has gone from more than $500 million at its peak in 2004 to less than $300 million today. Factoring in inflation and the rapidly rising cost of health care, the cut is deeper still.

“Fully funding the bill would have been great, but it really needed to happen over the past decade to make sure we had everything in place,” said Carolyn Mullen, chief of government affairs for the Association of State and Territorial Health Officials.

Some lawmakers did express discomfort with these dwindling resources as the bill moved through the House and Senate in 2018 and 2019 and onto President Donald Trump’s desk.

“I am worried that there is a lack of public health funding at a time when communities are facing increased need,” said Rep. Frank Pallone (D-N.J.), the then-ranking member of the Energy and Commerce Committee that debated the bill in the House.

In the Senate, Tammy Baldwin (D-Wisc.) told her colleagues as they voted the bill out of committee that while she understood that “resources are constrained,” she was “extremely concerned” at the lack of dedicated funding in the bill for pandemic flu preparedness.

“Congress has failed to provide sustained and predictable funding,” she said. “It’s essential to ensure we’re not caught flat-footed by this ever-present threat.”

Even Burr, the bill’s lead sponsor, acknowledged as it moved through committee that lawmakers tend to struggle with prioritizing preparedness programs.

“I don’t think we’ve done a good job of seeing those warning signs and responding to them,” he said. “Maybe that’s because Congress is architecturally more in a crisis management mode than a preparedness mode.”

Still, the vast majority of lawmakers in both parties voted for the pandemic bill, and a host of medical and advocacy groups endorsed it and praised its passage.

A Republican House aide who worked on its passage said the blame lies more with the subsequent spending bill, which gave some key programs far less money than the pandemic bill allowed.

“We authorized way more than was eventually appropriated,” he said, noting that the House’s cut-as-you-go rules prevented significant increases in funding for the programs. “We’re seeing now you need a lot of resources to go after a pandemic, and it’s very challenging to do that when it’s not in front of you. That’s not politics, that’s just reality.”

A Democratic House aide who worked on the bill’s reauthorization said even though “there has long been concern that a big pandemic was coming” among lawmakers and staff who work closely on these health programs, the push for funding for future threats lost out to pressure to address threats already underway.

“We wanted to prepare, but it was competing against other pressing needs of our country,” she said. “The opioid crisis was still ongoing. People were dying. The reality is that when you have limited resources, you deploy it to whatever the hottest thing is going on.”

Now, that disinvestment is now having real consequences.

Underfunded and understaffed state and local health departments were swiftly overwhelmed as the virus spread across the U.S. over the last few months, and are still today scrambling to ramp up testing, investigate hotspots of the virus, and obtain enough desperately needed protective equipment for health care workers.

“At the local level, we’ve had to rob Peter to pay Paul,” said Shah, who now runs the Harris County Public Health Department. “For more than three months we’ve been monitoring Covid-19, but we didn’t have any new funding coming in, so we had to rely on existing staff who we were pulling off what they were already doing to work on the response.”

In the absence of a coordinated federal plan to procure and distribute ventilators, masks and other medical equipment, governors are bidding against each other for that gear on the open market, pleading with corporations for donations, and encouraging residents to craft their own homemade supplies.

Top health officials have admitted that the Strategic National Stockpile, which Congress funded in last year’s preparedness bill, has just a small fraction of the materials needed on the frontlines of the pandemic — and many of those materials were past their expiration date.

Funding for the stockpile has hovered around $600 million per year for the past few years. Congress boosted that to just over $700 million in 2019. But reports last year from the agency in charge of maintaining the stockpile warned that more than a billion dollars was needed to replenish its stores and replace expired drugs and equipment.

As of Friday, the virus has killed more than 1,500 people in the U.S. and the development of a vaccine is likely a year or more away.

While Congress has recently rushed to pass trillions of dollars of emergency spending, including funding boosts for the programs in the pandemic bill, that funding is temporary, making it harder to invest in long-term improvements and recruit and retain a robust public health workforce.

Lawmakers and outside experts alike say they hope the silver lining of the current devastation is the emergence of a commitment to invest more in public health on a permanent basis — before the next disaster strikes.

“We as a nation have not valued public health until we’re in the midst of the crisis and we have to play catchup,” Shah told POLITICO. “So when the dust settles, we have to have a serious conversation in this country about how we fund public health.”

END_OF_DOCUMENT_TOKEN_TO_BE_REPLACED

“Today I am headed back to Braddock," he said. END_OF_DOCUMENT_TOKEN_TO_BE_REPLACED

Opinion | How the Buffalo Massacre Proves There’s No ‘Great Replacement’

It was no accident that a shooter who wanted to gun down Black Americans had to travel 200 miles to find them. END_OF_DOCUMENT_TOKEN_TO_BE_REPLACED