Prince Harry Has a Ponytail Now? Well, According to Rob Lowe He Does 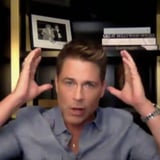 Rob Lowe stopped by The Late Late Show With James Corden on 11 Jan., and the first topic of conversation? The status of Prince Harry’s hair. According to the Parks and Recreation actor, he recently spotted Harry in his car in LA and believes the prince is now wearing his hair in a ponytail. Yup, you heard us right: a ponytail.

“I just ran into your countryman, the English treasure, Prince Harry, at the stoplight about 10 minutes ago,” Lowe told Corden. “He lives about a mile from me. He has been very reclusive. Seeing him in the neighborhood is like seeing the Loch Ness monster. . . and I finally saw him. I finally saw him driving his car, and I may have a scoop. It was very, very quick, don’t quote me on it, but it looked like he was wearing a ponytail . . . I’m just saying.”

Corden, rightfully so, didn’t believe his guest’s story. “I’m certain that isn’t true. Do you know what I think’s happened? I think you didn’t see Prince Harry,” he laughed.

Watch the full video above to see whether you think Prince Harry has turned into a ponytail man, or whether Lowe didn’t actually see the British royal at all.

END_OF_DOCUMENT_TOKEN_TO_BE_REPLACED

The 31-year-old was sentenced Thursday, after she was found guilty of possession and smuggling of cannabis oil. END_OF_DOCUMENT_TOKEN_TO_BE_REPLACED

QTEs too easy in The Quarry? There’s a harder option

If you like to live dangerously, look for a new Min Timer option listed under QTE Speed Quick-time events are a staple of Supermassive Games' cinematic horror adventures, but are the QTEs too easy in The Quarry? It's a more mainstream game, for sure. And while... END_OF_DOCUMENT_TOKEN_TO_BE_REPLACED