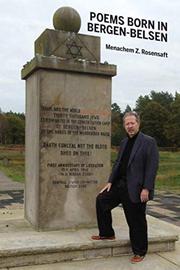 The author was born in the Bergen-Belsen displaced persons camp to two survivors of the Holocaust. His older brother, Benjamin, was killed at a concentration camp during the war, an event that the poet references in “A Refusal To Forgive the Death, by Gas, of a Child in Birkenau”: “my mother’s son / my mother’s child / his ashes diffused / toward the stars / almost three years / before I was born.” Rosensaft’s poems reverberate with loss as he grapples with the guilt of Polish bystanders who watched Nazis round up their Jewish neighbors and with his own longtime distrust of German names: “the difference,” reads one poem,“between John Smith / and / Hans Schmidt / is that I never wonder / whether John’s father / killed my brother.” His ruminations extend beyond the scope of World War II to subsequent genocides, as well as more recent events, such as the Covid-19 pandemic and the Black Lives Matter movement: “we must now all shout / that Black lives matter / until no child of God / ever again dies gasping / ‘I can’t breathe.’ ” The opening poem, “in the seconds after the truck hit me,” reveals the poet as a grandfather, still acutely aware of the fleetingness of life and all that can be lost in a split second. Rosensaft’s poems are sparse and measured, filled with images of ghosts, fires, ash, and darkness; they’re rarely portraits of quiet grief. More often, he animates the words with simmering anger as they voice frustration toward perpetrators, bystanders, and even God. It’s a cohesive collection, though some of the most affecting moments are when the author wanders further afield, as when he remembers his deceased parents while at a hotel in sunny San Remo: “paradise comes in different forms / we each have our own / if we can find it / mine is here.” Even so, his staccato verses always find their way back to the Holocaust era, reminding readers that some parts of the past are always present.

END_OF_DOCUMENT_TOKEN_TO_BE_REPLACED

Justin Bieber’s ‘Justice’ Returns To No. 1 On The ‘Billboard’ Albums Chart

Def Jam 'Justice' also becomes Bieber's first album to spend more than a week at No. 1 since 2010's 'My World 2.0.' END_OF_DOCUMENT_TOKEN_TO_BE_REPLACED