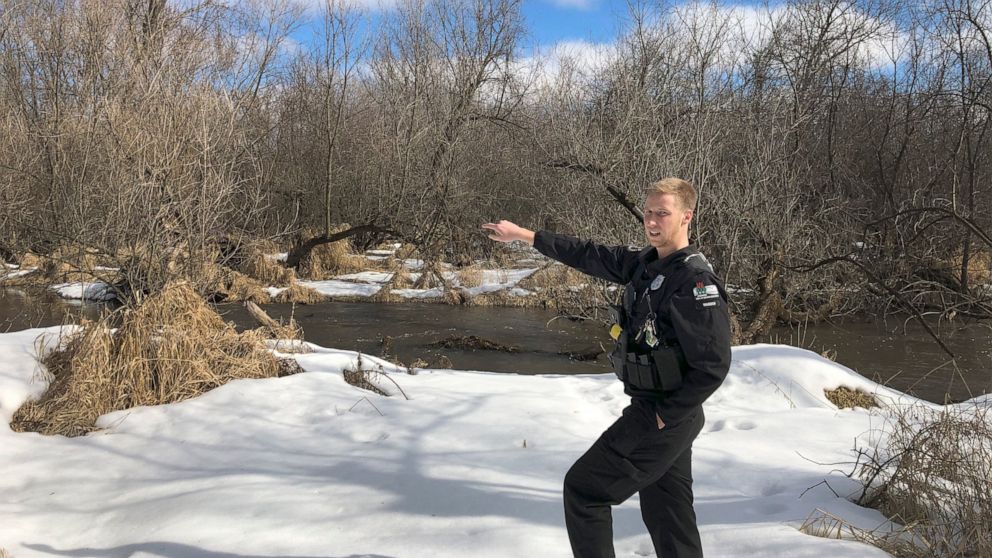 EDGERTON, Wis. — Austin Schumacher parked his unmarked squad truck and watched pheasant hunters work their way into the woods under the overcast, late-fall sky. The rookie Department of Natural Resources warden had just popped the lid of his salad container when the radio squawked: a 13-year-old boy, missing.

The boy had run away from Edgerton Middle School after a dispute with his teachers — he swore at them before he ducked out of the school and headed into the swamp across the street. Principal Clark Bretthauser tried to follow, but lost him in the mucky underbrush.

The boy was clad only in a T-shirt and sweatpants. The temperature was 39 degrees Fahrenheit (3.89 degrees Celsius) and falling as the sun dipped toward the horizon; forecasts called for a snowstorm at nightfall.

Schumacher put down his salad, flipped on his lights and sirens and headed for Edgerton.

Schumacher is 25. Growing up in southern Wisconsin, he fly fished and hunted “pretty much everything” — including deer with a musket. Inspired by an uncle who worked as a police officer, he majored in criminal justice at Madison’s Edgewood College. A post-graduation ride-along with a DNR warden showed him the way to a job that would combine police work with his love for the outdoors.

He spent two months training in the backwoods of northern Wisconsin, learning to track people in the wilderness without the aid of technology.

The most important lesson: Humans are lazy creatures. Animals will crawl under or go around obstacles. People will push them aside or plow through them. Everything in nature is vertical as it tries to reach the sun; if you see something horizontal, like a branch on the ground, chances are humans were there.

It was a lesson much on Schumacher’s mind a little after 3 p.m. on Nov. 1, as he rolled into Edgerton, a city of about 5,000 people 25 miles (40 kilometers) south of Madison, the state capitol. A search team had set off through the swamps to the northwest, the last direction the boy was seen heading.

But Schumacher’s instincts told him to go another way. He wanted to start where the boy had started in hopes of understanding his thinking. Alone, he circled the school grounds looking for signs and discovered a path leading into the marsh directly across the street.

He put on his hip waders, followed the path into the swamp and came to Saunders Creek, a roiling 20-foot-wide (6-meter-wide) stream clogged with deadfalls. He moved north up the streambank, searching for a spot where the boy might have crossed. Eventually he discovered shoeprints in the mud and marks on the far bank. This was where the boy had crossed.

Holding his equipment vest as high as he could, the young warden crossed the stream. The waist-deep water filled his waders, soaking his shoes, his pants, his pistol.

He climbed up the other side, dripping. He started looking for broken brush and branches, backtracking, moving forward, backtracking again, sometimes crawling to get under tree branches.

The temperature had dropped to 37 degrees (2.78 Celsius). The snow was closing in.

At last Schumacher, now caked with mud, picked up a trail of tracks left by a barefoot person, small prints with five little toes. Further on he discovered one of the boy’s shoes, then his socks. Schumacher figured they’d gotten so wet the boy had thrown them away.

He followed the footprints for about 2 miles (3 kilometers), testing the ground in front of him with a stick to assess its stability. Schumacher had barely eaten or drank anything all day; as the sun began to set he felt himself growing weaker.

He came to a series of retention ponds and his heart sank. He poked along their edges, praying he wouldn’t find the boy’s body. None of the other searchers were faring any better; radio traffic noted that a search boat had run into some trees.

The boy had been in the swamp for more than an hour. Doubts began to creep into Schumacher’s mind.

Overhead, a sheriff’s drone broadcast the voices of the boy’s parents.

Come out, they said. Don’t be scared. It will be all right.

Galvanized, Schumacher pushed on. He reached the edge of swamp and stood looking out at a tree line bordering a bean field. He caught a flash of maroon. He pulled out his binoculars and saw the boy curled up under a tree, T-shirt and pants soaked, his hands, feet and legs bloody.

He crept up to him, not wanting to scare him off. The frigid boy was shaking so much he could barely talk.

Schumacher stripped down to his T-shirt and dressed the boy in his coat and stocking cap. The boy asked him if people would be mad at him for running away. His body numb, he could not walk.

Schumacher checked maps on his phone, looking for a way out, and found a road about a mile (1.6 kilometers) south. He lifted the boy onto his back. The boy wrapped his legs around Schumacher’s waist, his arms around his shoulders. Schumacher began to walk.

Schumacher had been a basketball player in high school and is still trim and fit, a wiry 6-feet (1.83 meters) tall. But nothing had prepared him for this. The 90-pound (41-kilogram) boy and his 20 pounds (9 kilograms) of equipment weighed him down like an anvil. Again and again, he fell in the uneven terrain.

He radioed in his position, heard the search teams dispatch an ATV only to have it get stuck in the mud. The sheriff’s drone watched silently from above.

Darkness was closing in. He kept trying to talk to the boy, asking him about his favorite superheroes and video games. He was sweating now, the moisture evaporating and chilling him even more.

Then he came to the fence.

It was waist-high barbwire, running as far as he could see. There was no way he could carry the boy over it, no way to fit through it.

He set the boy down.

“I’m going to have to throw you over this fence,” he said to him.

He stepped back and swung the boy over. The boy landed on his feet and fell to the ground. Weighed down by his equipment vest, his gun belt and boots, Schumacher knew there was no way he could jump it. Instead he barrel-rolled over it, like a high-jumper doing a Fosbury flop. He landed hard on his back, but somehow avoided slashing himself to ribbons on the barbwire.

“We’re almost there,” he told the boy.

He swung him up onto his back again and resumed the hike as the first snowflakes came down.

Finally, he could make out cars on the road and houses. He staggered into a driveway and saw a squad car waiting for him. A deputy took the boy and hurried him into an ambulance as Schumacher collapsed to his knees.

Schumacher finished the last hour of his shift, went home and hugged his wife. He took a hot shower; when he got out, he was still cold.

He has not seen the boy since. He spoke with the boy’s mother by phone a day or two after the rescue; she told him that he was doing all right. That news, Schumacher said, was “huge.”

This month, Schumacher received the DNR’s Lifesaving Award. His training officer, Warden Tim Werner, said he wasn’t surprised at Schumacher’s valor. Nor was he surprised that Schumacher’s woodland expertise had had been put to use.

“There’s a lot to be said,” Werner said, “about just old-school woodsman’s skills.”

END_OF_DOCUMENT_TOKEN_TO_BE_REPLACED

Not to see Ray’s films was like not seeing the sun or the moon, said Akira Kurosawa. A retrospective affords you the chanceMartin Scorsese described the work of Satyajit Ray as “treasures of cinema” that should be watched by “everyone with an interest in film”... END_OF_DOCUMENT_TOKEN_TO_BE_REPLACED

Belize is a land of wonders – a heady mix of reefs, rainforests and Mayan culture. Here are the best eco-resorts where you can enjoy it all sustainably. END_OF_DOCUMENT_TOKEN_TO_BE_REPLACED

Biden and Harris speak to the wife of Brittney Griner

Can You Climb a Chain-Link Fence? The NYPD Wants You.