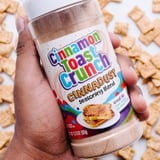 Calling all cinnamon-lovers! General Mills has released new Cinnamon Toast Crunch Cinnadust seasoning, and it’s about to become the MVP of all my newest baking creations. Much like salt and pepper, cinnamon deserves a place on every restaurant table, if you ask me, so this crunchy Cinnadust just earned a primetime spot in my spice cabinet. The cinnamon-sugar blend is infused with the sweetness of caramel, vanilla, and graham crackers, making it taste exactly like a bowl of the classic breakfast cereal. So, yes, 9-year-old me is extremely excited.

The sweet and crispy seasoning can be dusted over a slice of buttered toast, a baked sweet potato, milkshakes, cookie dough, ice cream, popcorn, french toast, or pancakes or even straight into a glass of milk to make instant cereal milk. The possibilities are basically endless, and I will be hogging up the kitchen to try them all out ASAP. The Cinnamon Toast Crunch Cinnadust is available exclusively at Sam’s Club for $6 starting Sept. 1, so try some for yourself and take a sneak peek at the treat ahead.

A New Girl Scout Cookie Is Coming in 2021, and It’s French-Toast-Flavored!

END_OF_DOCUMENT_TOKEN_TO_BE_REPLACED

Enter our giveaway, and you’ll automatically be eligible to win a 10-Piece Champions' Pasta, Soup & Stew Pot Set. You can enter up to two (2) times per e-mail address per day. Deadline 9.7.22. END_OF_DOCUMENT_TOKEN_TO_BE_REPLACED