‘Lawlessness’: This GOP candidate is testing a tough-on-crime message in New Jersey 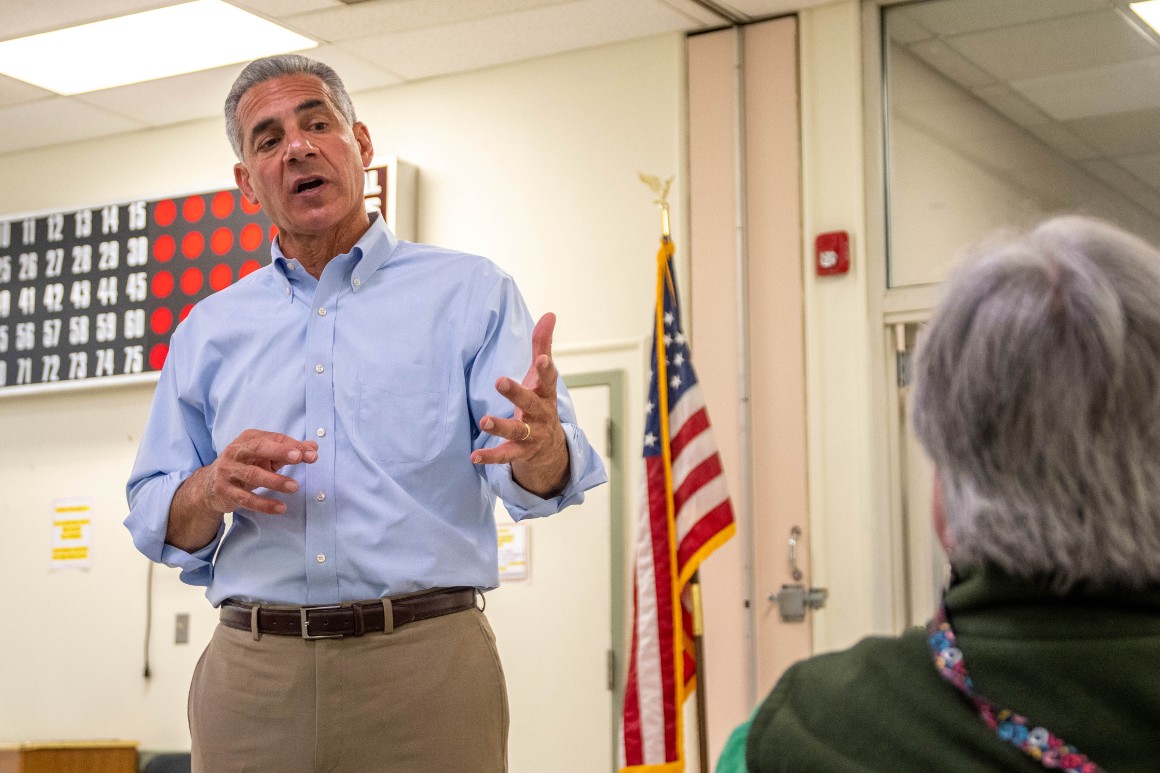 New Jersey’s Republican nominee for governor is leaning into a law and order message in the early days of the general election, capitalizing on crime incidents in pockets of the state and pinning them on Democratic Gov. Phil Murphy.

In recent weeks, former state lawmaker Jack Ciattarelli has blamed Murphy for “lawlessness” along the Jersey Shore, claiming that local police have been “disarmed” by Murphy and his former attorney general. A recent high profile endorsement from former U.N. Ambassador Nikki Haley warned of “rising crime” in the state. And last week, he released a new ad that claims Murphy is “anti-police” and that “it’s Phil Murphy’s fault” crime is happening in New Jersey.

“Crime is up across the state,” Ciattarelli said in an interview, overstating what has been a more localized issue. “All the progressive rhetoric of defunding, disbanding and reimagining police also contributes to what we’re seeing in our communities throughout the state. Our local law enforcement need to know that the governor and attorney general have their back.”

A focus on public safety has proven successful in recent races across the country. Some argue that Democrats lost seats in the House of Representatives in part by being associated with the “defund the police” movement. And with Eric Adam’s mayoral primary victory in New York City last month —an outcome he achieved largely through a public safety message — some see an issue that appeals to voters across the political spectrum.

The deployment of that approach against Murphy — the only governor facing reelection this year — offers another test of the strategy’s effectiveness ahead of the 2022 midterms. Three dozen states hold governor’s races next year, and most of Congress will be on the ballot.

Ciattarelli’s path to the governor’s mansion depends on winning over moderates and independents in New Jersey, where Democrats outnumber Republicans by more than a million registered voters. Murphy holds a 15-point lead in the most recent public opinion poll.

A recent Rutgers Eagleton poll also shows that Murphy gets middling poll results on crime and drugs. And with 78 percent of Americans believing that violent crime is a “major problem,” there’s room for Ciattarelli to win support — or at least energize his Republican base — with the aggressive messaging.

“When you see New York City Democrats voting for the law and order candidate who is a former cop … you know crime is an issue with the voters,” said New Jersey state Assembly Minority Leader Jon Bramnick (R-Union), a moderate Republican who is running for state Senate.

Statistics paint a more complicated picture of crime in New Jersey. Overall incidents of crime dropped in the first quarter of 2021 compared to 2020 by around 15 percent, though homicides — a very small portion of total crime — increased by around 40 percent, according to preliminary State Police crime data. Gun violence so far this year, measured by shooting hits and homicides, is also up 41 percent compared to the same time in 2020 and 51 percent compared to 2018, according to data from State Police.

But associating crime with Murphy could prove difficult, in part because the uptick in shootings and homicides has been seen in cities across the country. And Murphy’s administration has also shied from calls to defund the police — his lieutenant governor told police last fall that “we will never defund you” and former Attorney General Gurbir Grewal has said law enforcement needs more funding.

“Assemblyman Ciattarelli has spent his entire career advocating for policies that weaken law enforcement, including efforts to slash police salaries, eliminate collective bargaining rights, and vilify unions for layoffs resulting from budget cuts he introduced,” Harvey said in a statement. “While the Assemblyman is concerned with portraying himself as a Trump-like ‘law and order’ candidate, Governor Murphy has taken decisive action to boost public confidence in policing and build trust between law enforcement and the communities they serve.”

Both Murphy and Ciattarelli have plans — or records — that address crime. The Murphy campaign points to a $10 million line item in the newly signed state budget for “community violence intervention programs” and Murphy’s recent gun control pitch released in April. The Ciattarelli campaign promises to “fix” bail reform “loopholes,” expand community policing and recruit more women and people of color to work in law enforcement.

Ciattarelli’s law and order approach comes as the country — and parts of New Jersey — face publicized incidents of crime.

Paterson, one of the state’s largest cities, recently reached a grim milestone of 100 shooting victims this year, on track to exceed prior years. Ciattarelli has specifically called out seaside resort Atlantic City, which has been under the state’s control since Gov. Chris Christie, for publicized incidents of violence.

“We’ve seen shootings happen in broad daylight in Atlantic City — where the state has announced that it will continue to run the city for the next five years,” Ciattarelli said of the popular tourist destination. “Atlantic City needs help, particularly in the summer months when its daytime population can quintuple.”

Some local council members in Atlantic City have called for the State Police to intervene and help stem the violence, though politicians in the municipality remain split on how to address it. Atlantic City Mayor Marty Small Sr. — a Democrat and ally of the governor — spoke positively of the city’s relationship with the state, but said in a statement that he hopes to ramp up the local police force.

“We do have an ask for the State, however — we need to increase the number of police officers here in Atlantic City,” Small said. “The Atlantic City Police Department currently has 270 officers, which is the same number of officers we had in 1978.”

Ciatterelli’s claims of unruliness along the Jersey Shore also appear to mirror complaints by some local officials. Avalon, a seaside town, recently announced that it would limit beach and boardwalk hours overnight to control unruly crowds — directly blaming “Murphy’s destruction of effective enforcement of laws pertaining to juveniles, and the elimination of certain police powers,” the town’s Republican mayor, Martin Pagliughi, said in a statement.

Ciattarelli claims that Murphy and Grewal have “have made law enforcement harder.” He and the campaign cite directives that limit when car chases can be used, which previously led to fatalities over minor traffic offenses, and identifying police officers punished for misconduct as far as 20 years back.

But, while the Ciattarelli campaign tries to paint Murphy as antagonistic towards law enforcement, the police officer’s largest advocate doesn’t agree.

“I don’t think [Murphy’s] anti-police,” said Pat Colligan, president of the New Jersey State Policemen’s Benevolent Association, which endorsed the pro-labor Murphy in 2017. “He’s certainly a progressive governor. I don’t agree with everything he signs. … [But] when you look at what’s happening nationally in some police agencies, I think we fared pretty well in New Jersey, so far.”

Colligan said New Jersey “never really had a defund” the police conversation and he wasn’t sure how crime would become a “major issue” in the governor’s race. Still, an endorsement for Murphy was not a given and the union has “concerns” with both candidates.

Having too rigid a stance on crime could also alienate voters. Some point to the disparate impacts that tough-on-crime policies have left on communities of color, with New Jersey prisons having among the worst racial disparities in the country.

“We have tried the ‘tough on crime’ approach in the U.S. for decades, and it hasn’t worked,” Amol Sinha, the executive director of the ACLU’s New Jersey chapter, said in a statement. “Ending unjust policing and promoting racial justice should be at the top of the agenda for public safety. Any serious candidate for public office would embrace that.”

The focus on crime is a departure from Ciattarelli’s main priorities: lowering property taxes, which are the highest in the country, and creating a better business climate.

But as Ciattarelli tells it, the choice on crime is a binary one.

“My job as governor is to protect [and] preserve the public safety here in New Jersey,” he said. “And I think we could do a much better job of it than Phil Murphy.”

END_OF_DOCUMENT_TOKEN_TO_BE_REPLACED

Out of Town Blog Revenge celebration: Bambanti Festival comes back bigger & grander Bambanti Festival 2023 Have you seen giant bambantis? The Province of Isabela have them in all sizes, shapes, and colors. And for years, since 1997, Isabelenos keep them gettin... END_OF_DOCUMENT_TOKEN_TO_BE_REPLACED

The best book deals of the day, curated by Book Riot. END_OF_DOCUMENT_TOKEN_TO_BE_REPLACED

US traffic deaths are well above pre-pandemic levels

On this day in history, Feb. 6, 1911, President Ronald Reagan is born in Illinois