Published 10 months ago iNFO Vi10m ago

In late February, Bill Ackman began worrying about the approaching coronavirus pandemic. The silver-haired billionaire was so concerned about the economic fallout that he even contemplated selling all of the holdings at the investment group he founded almost two decades ago.

Instead, working from his study at home, Mr Ackman made a series of trades designed to “hedge” Pershing Square’s portfolio, that is, to protect it in the event of a market sell-off. Within a month, the trade had reaped $2.6bn of profits, captivating the hedge fund world and thrusting one of its most controversial stars back into the limelight.

New information, published in Mr Ackman’s letter to investors this week, shows the impact it had on Pershing Square’s portfolio. While its assets are worth just 3 per cent more than they were at the start of the year, it used profits from the trade to vastly increase its stakes in some of America’s most famous companies at knockdown prices. This has set Mr Ackman up to win a second time if he is right and the economy rebounds quickly once the coronavirus shutdown is lifted.

The coronavirus hedge marked the first time that Pershing Square had wagered in credit default swaps since the financial crisis.

At first glance, it was an unusual move for an activist investor who made his fortune by taking big bets on equities, then loudly and publicly defending his point of view. But the mere scale of the latest trade bore the hallmark of an investor whose career has turned on a small number of large bets.

Mr Ackman quietly scooped up a set of huge insurance policies linked to $71bn of corporate debt — ten times Pershing Square’s assets under management. By the time he exited the position, he had paid only $27m in premiums.

The hedge fund industry is no stranger to big bets. Whereas hedge fund manager John Paulson’s financial crisis era “big short” was a highly-complex wager that the US housing market would collapse, Pershing Square’s trade was an opportunistic attempt to protect itself using standard derivative contracts.

Big US banks — primarily Citi, Goldman Sachs and Bank of America — helped Mr Ackman quietly amass the positions. The institutions on the other side of the trade were told their new counterparty was investing outside its normal area of expertise and was willing to pay slightly over the odds for protection against a deterioration in the economic outlook. The three banks declined to comment.

The firepower and flexibility to take this view at scale was enabled by Pershing Square’s unusual structure. Unlike most hedge funds, which can face calls from investors to retrieve their money, it raised $2.8bn in a Netherlands stock market listing in 2014. This gave it permanent capital to invest.

The sort of insurance policies Pershing Square purchased are linked to indices of corporate bonds and are widely traded, in many cases easier to buy and sell than the individual bonds on which they are based.

Conditions for borrowers had been so good for so long that the price to insure against them defaulting was close to the lowest it has ever been: around 50 basis points of the insured amount for investment grade debt, per year. 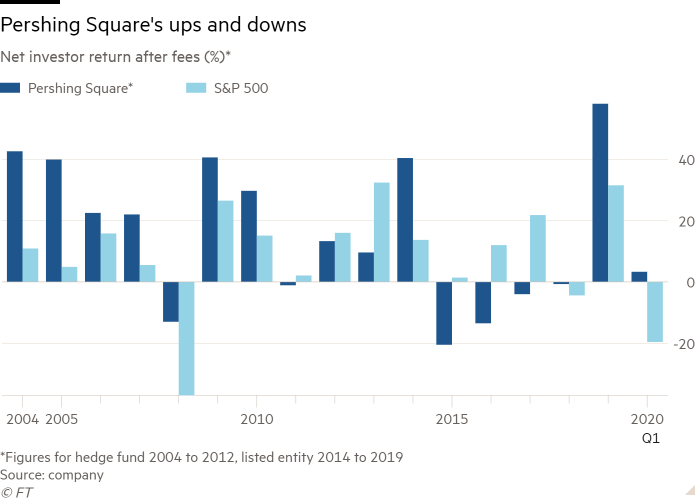 According to a person familiar with the trades, Pershing Square built up CDS on $50bn of US investment grade debt, a $18.5bn position in the equivalent European index, and a $2.5bn notional exposure to Europe’s high-yield debt.

Such policies typically last for five years, but Pershing Square paid less than the first month’s $40m premium. By early March, investors were waking up to the implication that stopping the spread of Covid 19 meant entire industries, including airlines, travel and hospitality, would essentially shut down for an unknown period.

In short order the cost of insuring debt quadrupled. “In the first couple of weeks of March there were a lot of buyers and very few sellers”, said David Riley, a partner at BlueBay Asset Management.

Mr Ackman had to stomach huge swings in the value of the firm’s CDS position as US markets leapt and plunged as well as an enormous $485m yearly premium if he was forced to hold on to it for longer than anticipated.

On March 13, for example, the S&P 500 rose 10 per cent in a day and the value of Pershing Square’s contracts dropped by $800m, a person familiar with the firm said. This was a hair-raising amount of volatility for a position that had come to represent about 40 per cent of the firm’s assets at its peak.

Mr Ackman began to sell as fast as he could without alarming the market and after offloading the insurance policies, he had booked a $2.6bn profit.

By the time Mr Ackman made an emotional appearance on CNBC on March 18, he had sold about half the position. His voice cracked as he called on governments “to shut the world for 30 days” to avoid human and economic disaster. Commentators suggested he was trying to send the markets lower, but Mr Ackman told CNBC he was “aggressively buying stocks”. He later added on Twitter that he saw “bargains of a lifetime”. The newly-bullish stance was prompted by what he perceived to be encouraging signs that the Trump administration was dealing with the economic fallout of coronavirus.

The hedge fund manager doubled down on existing positions in his portfolio — companies that had been hurt by the market sell-off but had business models he believed would thrive in the long term. This included hotel group Hilton Worldwide Holdings, Warren Buffett’s Berkshire Hathaway, and property group Howard Hughes Corporation. Pershing Square also bought back into Starbucks, the coffee chain that it had sold out of at almost twice the price earlier this year.

These concentrated positions are characteristic of Mr Ackman, whose reputation was made on spectacular bets, such as a $60m investment in General Growth Properties, a bankrupt mall operator that Pershing helped rescue in 2009, which would eventually be worth $3.6bn.

Despite Mr Ackman’s strong long-term record — Pershing Square has recorded annual investment gains of 14.5 per cent — there have been bumps along the way. Mr Ackman and his co-investors lost almost all of $2bn spent on financial derivatives related to Target, after an activist campaign seeking changes at the US retailer fizzled out.

Then after Pershing Square gained a whopping 40 per cent in 2014, it subsequently suffered a string of bad years, wrong-footed by big bets on pharmaceutical company Valeant, and Herbalife, the multilevel marketing group. Mr Ackman spent enormous amounts of time and money in a high-profile campaign to persuade the US government to investigate what he alleged was a pyramid scheme. The stock market merely shrugged at the consequences of the multiyear probe which resulted.

These setbacks prompted Mr Ackman to take a step back from the public eye. Now Pershing Square’s biggest and best-ever trade has left him in a familiar position: centre stage and resolutely bullish about the stocks he thinks you should own too.

END_OF_DOCUMENT_TOKEN_TO_BE_REPLACED

Lucy Kellaway: Is it OK to be happy in lockdown?