Google Cloud today announced the beta launch of Game Servers, a managed service that provides game developers with the usual backend services for running their games, including multi-player games, in the company’s cloud. It’s worth stressing that these are not game streaming servers but solely meant to make it easier for game developers to build, scale and manage the backend services for their games. 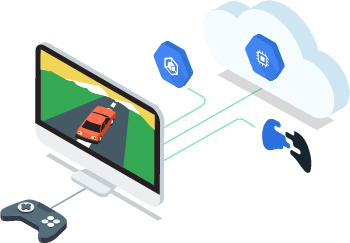 The service sits on top of the Agones open-source game server, a project Google and Ubisoft first announced in 2018, and the Kubernetes container orchestration platform. As Google Cloud product manager Scott Van Woudenberg told me, the team is also reusing some parts of Anthos, Google’s service for managing multi-cloud Kubernetes clusters. And while Game Servers can currently only run on the Google Kubernetes Engine, the plan is to allow for hybrid and multi-cloud support later this year.

Quite a few gaming companies have already built their own on-premises server fleets, so just like in the enterprise, having hybrid-cloud capabilities is a must-have for a tool like this. Google will also make it easy for developers who already use Agones outside of Game Servers today to bring those servers into the same managed Game Servers ecosystem by registering them with the Game Servers API.

As Van Woudenberg noted, virtually every game now needs some kind of cloud backend, be that for multi-player features, match-making or keeping persistent game stats, for example. That’s true for indie developers and major game studios. Game Servers, ideally, will make it easier for these companies to scale their clusters up and down as needed. Game Servers also provides for A/B testing and canary tests, and, in future updates, it will include integrations with the Open Match matchmaking framework.

To get started, developers still have to containerize their game servers. For those companies that already use Agones, that’s a pretty straightforward exercise, Van Woudenberg said. Others, though, need a bit more help with that, and Google is working with partners to walk them through this.

END_OF_DOCUMENT_TOKEN_TO_BE_REPLACED

Belize is a land of wonders – a heady mix of reefs, rainforests and Mayan culture. Here are the best eco-resorts where you can enjoy it all sustainably. END_OF_DOCUMENT_TOKEN_TO_BE_REPLACED

Not to see Ray’s films was like not seeing the sun or the moon, said Akira Kurosawa. A retrospective affords you the chanceMartin Scorsese described the work of Satyajit Ray as “treasures of cinema” that should be watched by “everyone with an interest in film”... END_OF_DOCUMENT_TOKEN_TO_BE_REPLACED

The 7 best online brokerages for investors of all kinds, from kids to pros