FOR MALICE AND MERCY 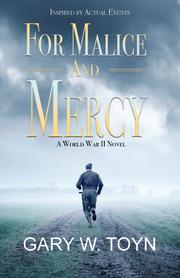 Karl and Marta Meyer joined the Church of Jesus Christ of Latter-day Saints in Germany and then moved to Utah around 1919. Naturalized citizens, the German immigrants have two teenagers, Ella and her younger brother, Hank. Readers meet the family in 1939, together with Ella’s best friend, Billie Russell, and Hank’s new friend Chester Bailey. It is in these early pages that Toyn plants a harbinger of the trouble that will descend on the family in the years to come. Readers learn that Hank has a small suitcase that contains mementos (a Nazi Youth Movement uniform and a Nazi flag) from a childhood visit to his grandparents in Germany. After nicely establishing local period atmospherics, the author moves quickly to December 1941. Hank is a junior in high school; Ella is in nursing school; and Billie has become a civilian pilot. It is the morning of Dec. 7. Karl and Marta have returned from a German social club event and report that they left early in disgust when some Nazis took over the meeting. A few hours later, the Japanese attack Pearl Harbor, and America is at war. Four days later, Germany declares war on the United States. Much of Toyn’s absorbing narrative is devoted to a portrayal of the darker aspects of America’s war history, as depicted through parallel stories that feature Hank, Billie, and Karl and Marta after the couple are arrested as Nazi sympathizers and placed in internment camps. While Hank enlists in the Air Force and winds up in a violently abusive Austrian prisoner of war camp (Stalag 17-B), Billie becomes a high-flying Women’s Airforce Service Pilot, delivering newly minted planes to bases around the country. Billie’s tale is a vehicle for revealing the overt male pilot hostility, including sabotage, toward female aviators. The roundup and use of ethnic Germans in secret prisoner exchanges is verified by the author’s copious, annotated footnotes. Although highly informative, the embedded notes do disrupt the flow of an otherwise dramatically engaging and unsettling novel.

END_OF_DOCUMENT_TOKEN_TO_BE_REPLACED

Ade Akinfenwa asked Liverpool’s Jurgen Klopp ‘to hit him up on WhatsApp’, has ‘no doubt’ he’ll still be strongest player on FIFA 22 and is in talks for WWE career ahead of cup clash at Man City

Wycombe Wanderers hero Adebayo Akinfenwa is hoping to write one more chapter in his fairy-tale story against Manchester City. The 39-year-old, who has already announced his plans to retire at the end of the season, could play his final ever Carabao Cup game to... END_OF_DOCUMENT_TOKEN_TO_BE_REPLACED

This morning the hard working folks behind the 57th  Chicago International Film Festival unveiled their full line-up, complete with nearly 90 feature films and four world premieres. From October 13-24, the festival will bring some of the year’s most anticipate... END_OF_DOCUMENT_TOKEN_TO_BE_REPLACED

WHERE NO ONE SHOULD LIVE