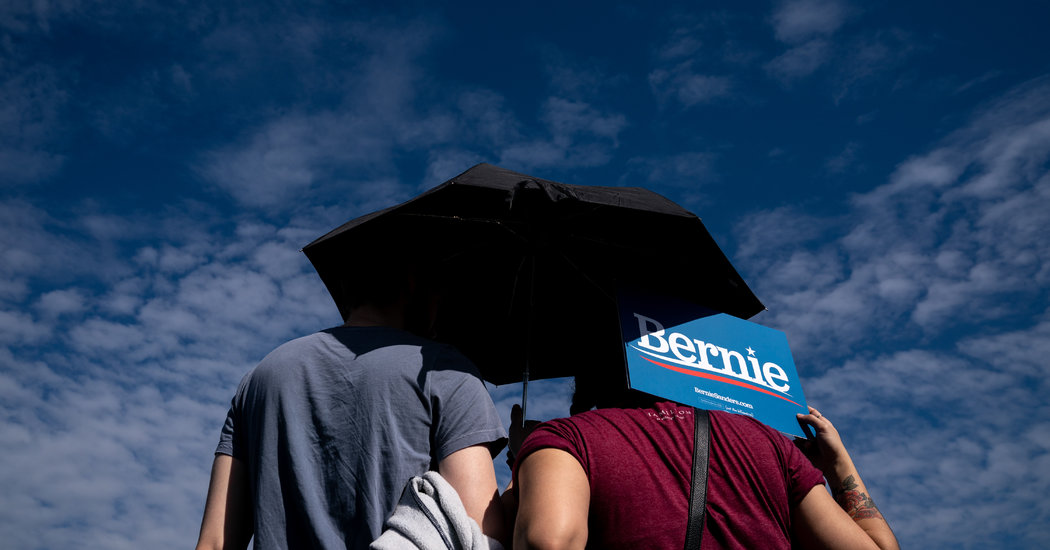 Stop saying that he can’t defeat President Trump. That is by now a given. In fact, in head-to-head national polls, Sanders consistently outperforms Trump.

Sanders is, for the moment, the clear front-runner to win the Democratic nomination. And he has a national infrastructure and a committed band of supporters and donors that make it clear that he could go the distance.

Furthermore, Sanders’s impressive win in Nevada proves that he can attract a broad range of support, at least in one part of the country. This in particular is an significant feat. When Sanders ran four years ago, the breadth of his appeal was indeed an issue, which was an issue similar to the one Pete Buttigieg faces during this election. Since then, Sanders has recognized that shortcoming, and has worked hard to address it.

If Sanders can sustain this momentum, he will be the nominee. And then it will be on to a matchup with Trump. Now, trying to predict what voters will do in November is dicey business, but I am by no means counting Sanders out.

Yes, I know all the issues with a Sanders candidacy.

First, he is a self-described democratic socialist. I don’t believe most people know what that means, but it is different and Trump will make it sound frightening, and many Americans are likely to be wary of it.

The larger problem here is that the absolute definition isn’t quite fixed. In 2017 Vox’s Jeff Stein wrote an article entitled “9 questions about the Democratic Socialists of America you were too embarrassed to ask.”

Stein’s first question was, “What does D.S.A. believe in?” His answer:

“Like most socialist organizations, D.S.A. believes in the abolition of capitalism in favor of an economy run either by ‘the workers’ or the state — though the exact specifics of ‘abolishing capitalism’ are fiercely debated by socialists.”

Not even academics agree. As Frances Fox Piven, a scholar of the left at the City University of New York and a former D.S.A. board member, told Stein, “The academic debates about socialism’s ‘meaning’ are huge and arcane and rife with disagreements, but what all definitions have in common is either the elimination of the market or its strict containment.”

Sanders has his own definition, which he explained in a CNN town hall in Washington, D.C.:

“What democratic socialism means to me is having in a civilized society the understanding that we can make sure that all of our people live in security and in dignity. Health care is a human right.”

He went on to say, “When I talk about democratic socialism, what I talk about are human rights and economic rights.”

That’s too broad and amorphous. This will be a tremendous hurdle. He will need to refine the term and defang it. But, being in the throes of a presidential campaign is not exactly the time to educate the American people on an exotic political label.

In addition, the Russians and Donald Trump seem to want him to win the nomination. That is worrisome. The Russians may well like some of Sanders’s noninterventionist foreign policy instincts, but it is just as likely that they find Sanders to be the most destabilizing Democratic candidate. As Gleb Pavlovsky, a political scientist who used to advise Vladimir Putin, told GQ’s Julia Ioffe, “Our candidate is chaos.”

And, in the end, both the Russians and Trump presumably believe that Sanders will be the easiest to defeat.

Then there is the overall idea that Sanders is calling for nothing short of a political revolution that fundamentally reshapes the country. For some people, particularly many young ones, this is an extremely attractive idea. But for others it is absolutely terrifying.

“Medicare for all,” one of Sanders’s central policies, has a problem gaining traction even among Democrats. As a recent Kaiser Family Foundation poll found, “More Democrats and Democratic-leaning independents would prefer voting for a candidate who wants to build on the A.C.A. in order to expand coverage and reduce costs rather than replace the A.C.A. with a national Medicare-for-all plan.”

Furthermore, there are jitters among the Democratic political class that Sanders is running against them, not with them, and will have a negative effect down ballot. Sanders’s Twitter account tweeted last week:

That establishment includes the Democrats now in office. They include the Democratic majority that now controls the House of Representatives. Indeed, you could argue that it even includes Sanders himself.

Sanders has work to do. He has some very real hurdles to clear. And it will not be easy. His opponents would use every instrument at their disposal during a general election to tar and feather him.

But, all that stated, I still wouldn’t doubt his ability to win. There is a very real desire for real change in this country. It would be a mistake to discount it.

END_OF_DOCUMENT_TOKEN_TO_BE_REPLACED

At the Races: Crime and crude

Welcome to At the Races! Each week we bring you news and analysis from the CQ Roll Call campaign team. Know someone who’d like to get this newsletter? They can subscribe here. By Mary Ellen McIntire, Kate Ackley and Niels Lesniewski October is here, and with i... END_OF_DOCUMENT_TOKEN_TO_BE_REPLACED

CAPE CANAVERAL, Fla. (AP) — A Russian cosmonaut who caught a U.S. lift to the International Space Station arrived at her new home Thursday for a five-month stay, accompanied by a Japanese astronaut and two from NASA, including the first Native American woman i... END_OF_DOCUMENT_TOKEN_TO_BE_REPLACED