SAN LUIS VALLEY, Colo. — A woman with pregnancy complications needed permission from her boss to visit a doctor. Community health volunteers were turned away from delivering food and covid information to worker housing. A farmworker had a serious allergic reaction but was afraid to seek treatment.

To Nicole Civita, policy director with Colorado advocacy group Project Protect Food Systems Workers, such stories encapsulate an entrenched power dynamic that covid-19 has brought into focus: Farmworkers are “essential but treated as expendable,” including when it comes to accessing health care.

Her organization is one of many that supported Colorado legislation dubbed the Farmworker Bill of Rights. Among its provisions is a requirement that the more than 3,000 Colorado farmworkers who live in employer-provided housing be able to visit, or be visited by, medical professionals and community health workers. Employers must also provide transportation to medical visits for those without vehicles. The bill passed the legislature Tuesday and is now off to the governor.

Augusto Basterrechea, who does outreach to farmworkers for the Colorado Department of Labor and Employment in the San Luis Valley, an agricultural hub, said that in his eight years in the role he had never heard of a farmworker being unable to get medical care, even during the pandemic.

But former farmworker Anita Rodriguez clearly remembers a call she received at 2 a.m. in September, when the harvest was in full swing in the region bordered by snow-capped mountains and known for its high-altitude crops of potatoes, lettuce and spinach. It was from a man working on a farm. “He was freaking out.”

His body was covered in large red hives and his face was swollen. He could barely open his eyes. He wanted medical attention, she said, but was worried about being caught sneaking out of his employer-provided housing, which is surrounded by tall chain-link fencing, much of it topped with razor wire. A foreman watched over the camp and allowed just three or four workers to leave each day, he told Rodriguez, who volunteers as a community outreach worker and recounted the story to lawmakers in March. 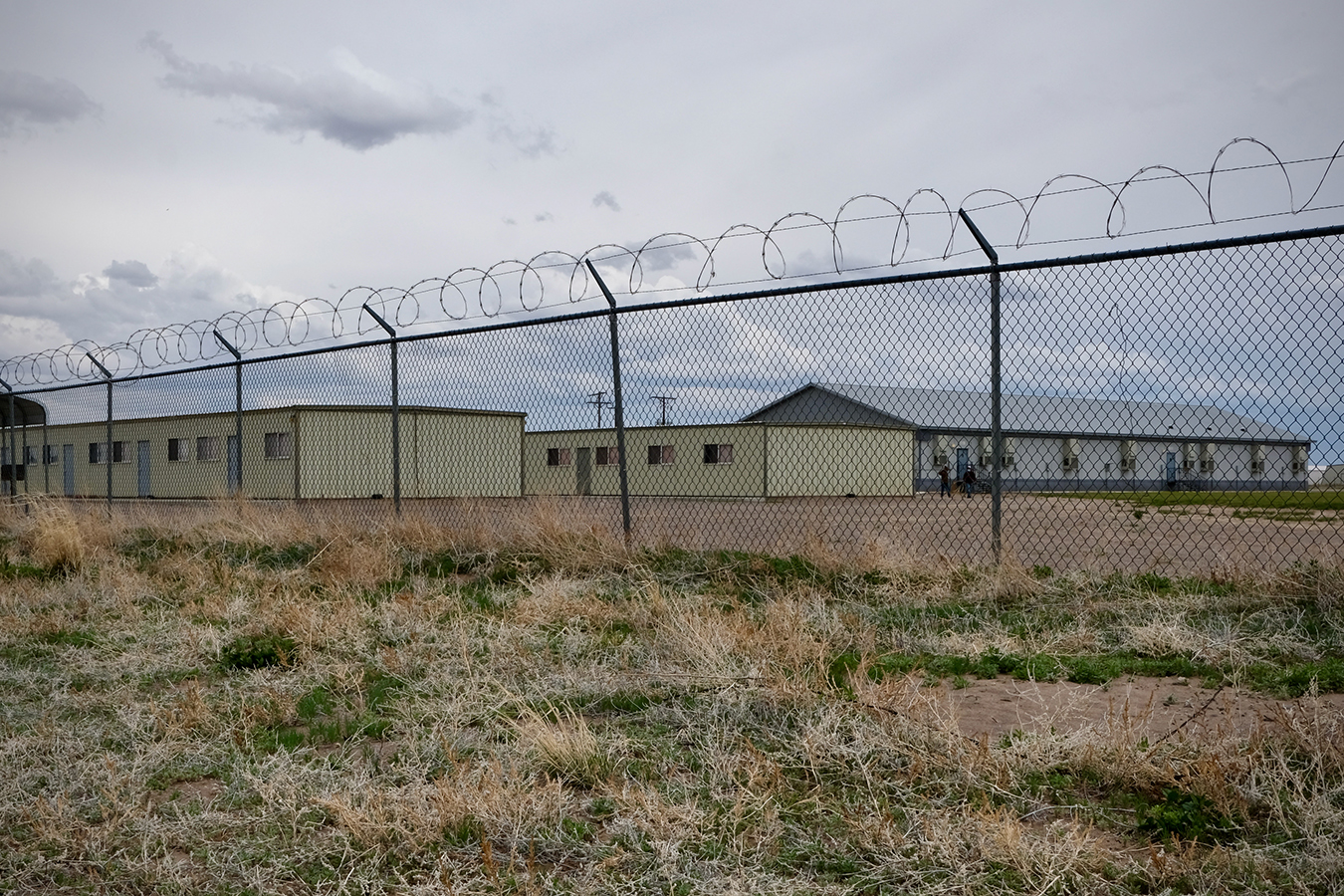 Amy Kunugi, general manager of Southern Colorado Farms, said that the razor wire is intended to deter break-ins during the off-season and that the farm has never policed employees’ comings and goings. However, covid protocols had banned visitors unless approved by managers and limited the number of employees who could leave for essential trips at a given time.

“I’m just kind of gobsmacked,” said Kunugi, who first learned of the story at the March legislative hearing on the bill. She said she hasn’t found any employees who are familiar with the story. “We always would transport people if they needed health care.”

Linda Rossi with Fresh Harvest, the company that recruits farmworkers for Kunugi’s farm, added: “There is no way this allegation has any merit, and if anyone so much as said they had the hiccups last year, we responded.”

Still, Rodriguez said, this man having a medical emergency on his day off felt scared enough about seeking urgent care that he hatched a plan with her: They waited until later that morning, when he was sure he could sneak out unnoticed. They met at the dollar store down the street, and Rodriguez drove him to an urgent care clinic in the next town over.

“He was afraid to get caught because he didn’t want to lose his visa,” she said. “That’s how he supports his family.”

After the man received treatment for his severe allergic reaction, she said, they drove back toward the worker housing. He slunk down in his seat and asked that Rodriguez drive by slowly, so that he could make sure the foreman’s car was not outside. Then, she said, he “jumped out of my car like a bat out of hell” and sprinted back inside.

The U.S. Department of Agriculture estimates the nation has 3.2 million farmworkers, with more than 36,700 in Colorado. Nationally, according to the Department of Labor’s National Agricultural Workers Survey of 2015-16, about 15% of crop workers lived in employer-provided housing, and a little under half said they had health insurance. While about 40% of respondents said they had not used health care services in the U.S. in the previous couple of years, around 87% said they’d needed it.

About half of crop workers in that survey were undocumented, leaving them vulnerable to abuse and intimidation by their employers. Even those with agricultural work visas can find their movements restricted: The international migrant rights organization Centro de los Derechos del Migrante found that more than a third of 100 workers surveyed in 2019 reported that their employer determined when they could leave their housing or job site.

Jenifer Rodriguez, managing attorney with the nonprofit Colorado Legal Services (no relation to Anita Rodriguez), said that, in addition to barriers like lack of health insurance and the cost of treatment, farmworkers are vulnerable to employer retaliation. In her 14 years representing farmworkers in Colorado, she’s spoken to, among others, a sheepherder whose employer wouldn’t give him a ride to a doctor for what turned out to be a brain tumor, and health care providers prevented from entering farm property to visit workers even when they were off the clock. “There are a lot of employers that deny them access to do that,” she said.

Growers balked at the Farmworker Bill of Rights, primarily over its requirement to provide overtime pay. “The way it was introduced, it probably would have put the majority of the industry out of business. Literally,” said Marilyn Bay Drake, executive director of the Colorado Fruit and Vegetable Growers Association.

At the state Senate hearing in March, some farmers testified they were “embarrassed” and “shaken” to hear stories of worker mistreatment. Potato farmer Harry Strohauer repeated a common refrain: “There may be a few bad apples in our group, but I don’t see it. None of us have seen it. We believe that we do a good job. We believe we take care of our people.”

Civita, with Project Protect, finds that argument problematic. “So often we get stuck, when we’re trying to dismantle structural racism in the law, on who’s a good employer and who’s a bad employer,” she said. “But even the ones who stack up as good compared to others are really used to maintaining pretty significant power gaps.”

Civita said those power gaps were institutionalized in the 1930s with two federal laws, the National Labor Relations Act and Fair Labor Standards Act, that promised workers a minimum wage, overtime pay and the right to organize. According to research from Loyola University Chicago, while the measures originally included all workers, a group of Southern congressmen pushed to exclude domestic workers and farmworkers — positions primarily held then by African Americans.

At the time, congressional records show, a Florida representative said, “You cannot put the Negro and the white man on the same basis and get away with it.”

Nearly a century later, farmworkers in 40 states, including Colorado, still have no right to organize and no more than a handful of states guarantee them overtime pay. Only half of states, including Colorado, require employers to provide workers’ compensation for job injuries. Farmworkers are also excluded from several federal safety standards — such as ladder safety and falling protections — even though they work in an industry the U.S. Labor Department considers among the most hazardous.

Rodriguez, the lawyer with Colorado Legal Services, points to an undocumented Colorado dairy worker who recently died when the tractor he was driving fell into a manure pit that reportedly had no guardrails. Rodriguez hopes the right to organize would help workers advocate for health and safety measures to prevent such tragedies. “People just aren’t willing to step up and do it because, you know, fear of losing their job.”

A farmworker who asked to remain anonymous because she’s undocumented and fears deportation if her identity is revealed told KHN she had been working for a potato producer in the San Luis Valley for 10 years when she became pregnant.

“That’s when everything changed,” she said in Spanish. “They were annoyed.”

Because she lived in employer-provided housing, she said, she had to ask for permission to go to every doctor’s appointment, even when she started having complications with the pregnancy. “It wasn’t fair, but we relied on our jobs because we were living in farm housing,” she said.

On a winter morning, she went into labor. As her husband drove her to the hospital, he called his supervisor, who told him he was expected at work by noon. “Obviously he couldn’t,” she said. “I was in labor for 12 hours.”

When her husband reported back the following workday, he was scolded for missing work. Within a week, they were both fired.

She doubts the new bill would change conditions for workers like her.

“The companies are going to do everything possible to fight,” she said. “They don’t care if you have problems, if you’re sick or if a parent has died. They’re only interested in the work.”

END_OF_DOCUMENT_TOKEN_TO_BE_REPLACED

Sadia Hussein: the FGM survivor who is saving girls from the knife

In Texas-Mexico Border Towns, COVID-19 Has Had an Unconscionably High Death Toll