BETTER DAVIS AND OTHER STORIES 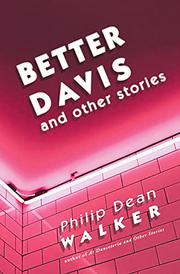 Walker’s tales set fictional and real-life creative figures—drag queens, sitcom stars, Broadway impresarios, movie divas—in the early 1980s, when gay entertainers were emerging from the closet just as the HIV virus was starting to decimate their ranks. Jim J. Bullock, co-star of the TV comedy Too Close for Comfort, ponders past bruising relationships and his own HIV diagnosis while enacting a bizarre “very special episode” in which his character is raped by two women; and Natalie Wood spends the night of her drowning flirting with Christopher Walken and fighting with her jealous husband, Robert Wagner, while wondering if Wagner is gay. Elizabeth Taylor and Maureen Stapleton follow their stage performance in The Little Foxes by trading acting tips and quips and then repairing to a drag club; drag impersonator Better Davis haunts a man’s reminiscences of the shriveling gay demimonde in Washington, D.C.; an airline steward continues his hyperpromiscuous sexploits while hiding his Kaposi’s sarcoma lesions; and Michael Bennett, director of the musical A Chorus Line, coldly prepares to replace a cast member who has AIDS—which will kill Bennett himself a few years later. Walker’s yarns probe the deep symbiosis of the entertainment industry with gay life as they feed off each other’s styles and sensibilities and a common fascination with identity and role-playing. His sparkling prose often has an Old Hollywood feel to it; sometimes it revels in bitchy repartee—“ ‘You drink too much,’ Liz said. ‘Why?’ ‘Why not?’ said Maureen. ‘You marry too much. Why?’ ”—and sometimes it’s suffused with a romantic glow. (“When Troy and Grayson shook hands,” Harrison “saw something happen immediately….It would be too cliché to call it ‘electric’ but it was as if someone had dimmed the lights in the entire restaurant and illuminated the two of them from below with a floor light, casting everyone else in the room as mindless extras who were only there to observe and comment on the two main characters discovering each other as soulmates.”) The result is a wistful, absorbing re-creation of lives and loves caught up in a cultural transformation that is both fertile and tragic.

END_OF_DOCUMENT_TOKEN_TO_BE_REPLACED

How weatherization can be a win-win for struggling Americans

Biden and Trudeau profess a great friendship, but these nine key issues won’t be solved by smiles. END_OF_DOCUMENT_TOKEN_TO_BE_REPLACED

WHERE NO ONE SHOULD LIVE