Berthe Morisot, Impressionism’s Most Relentless Innovator, Is Finally Receiving Her Due

Widespread recognition is arriving over a century late for Berthe Morisot, a true innovator who died at the height of her promise. She was a founding member of Impressionism, whose marquee names counted themselves as both admirers and friends. But, unlike her peers, whose more experimental inclinations were tempered by a need to please patrons, her canvases bear vivacious brushstrokes and unusual figuration which nearly leapfrogged Impressionism to abstraction. She featured prominently in every annual Impressionist exhibitions, except one that she missed because she was recovering after the birth of her daughter.

These shows were generally met with acclaim. Critic Paul Mantz wrote in his review of the third Impressionist exhibition in 1877 that “there is only one true Impressionist in the whole revolutionary group—and that is Mlle Berthe Morisot.” Yet Morisot’s gender also played a role in how she was perceived. Writers in her day used terms like “flirtatious” and “charming” to describe her work; neither were labels given to the paintings of Claude Monet, Pierre-Auguste Renoir, and others.

Even today, there are still hints of sexism in the ways Morisot is discussed. In 2018, when the Barnes Foundation in Philadelphia mounted the first U.S. retrospective devoted to her, it was subtitled “Woman Impressionist. (“Imagine a parallel case: say, ‘Georges Braque: Man Cubist,’” quipped the New Yorker’s Peter Schjeldahl.) Although that traveling retrospective did a lot to ensure Morisot’s place in art history, the artist is still lesser-known than her male colleagues. Reviewing the 2018 exhibition, art historian Carol Strickland asked, “Why does her popularity lag so far behind that of artists in Impressionism’s boys’ club, who seem to have blockbuster exhibitions every year?”

Born in 1841 to a bourgeoisie family (her father was a high-ranking civil servant, her mother the great-niece of the Rococo painter Jean-Honoré Fragonard), Morisot and her older sister, Edma, were unusually positioned to pursue their artistic ambitions. Though barred from a formal arts education, they flourished under private tutelage, making studies of Old Master paintings at the Louvre and eventually studying under the Barbizon painter Jean-Baptiste-Camille Corot, who taught both plein-air painting. Edma’s skills were especially praised by Corot, but she gave up her vocation to marry a naval officer. She moved away from Paris, but the sisters corresponded often and with warmth about Berthe’s practice.

In 1864, she exhibited under her full maiden name in the prestigious Salon de Paris, the annual exhibition of the Académie des Beaux-Arts in Paris. Despite the accomplishment, she was prone to insecurity and destroyed many works created before 1869.

While working as a copyist at the Louvre, Morisot met and befriended Édouard Manet, whose revolutionary vision led to Morisot’s own aesthetic breakthrough. The two formed a deep friendship which some suspect hid a love affair. He displayed three of her works in his bedroom and Morisot frequently sat for Manet, beginning with The Balcony (1868), in which she gazes forward, a vision in a white dress. She married his mild-mannered brother, Eugène, In 1874, at the age of thirty-three. Eugène appears in her later work often playing with their only child, Julie.

Morisot mostly painted glimpses into women’s private spaces: a young woman combing her sister’s hair or a mother tending her children. In The Cradle (1872), among Morisot’s most famous works, Edma gazes at her sleeping infant, Blanche. Edma’s left arm is bent, creating a mirror image of the child, who is veiled by the gauzy white curtain. The viewer has wandered into a scene of palpable intimacy.

Manet invited Morisot to exhibit in the first Salon des Refusés, a subversive showing of avant-garde works rejected by the Salon de Paris. In a review for Le Figaro, Albert Wolff wrote that that the show consisted of “five or six lunatics of which one is a woman… whose feminine grace is maintained amid the outpourings of a delirious mind.” (By 1880, he considered her the best of the bunch.) During this time Morisot began developing a distinctive, unfinished style, as it was her belief that painting should strive to “capture something that passes.” Like Degas, she often worked in oil, watercolor, and pastel, painting “a mouth, eyes, and a nose with a single brushstroke.” 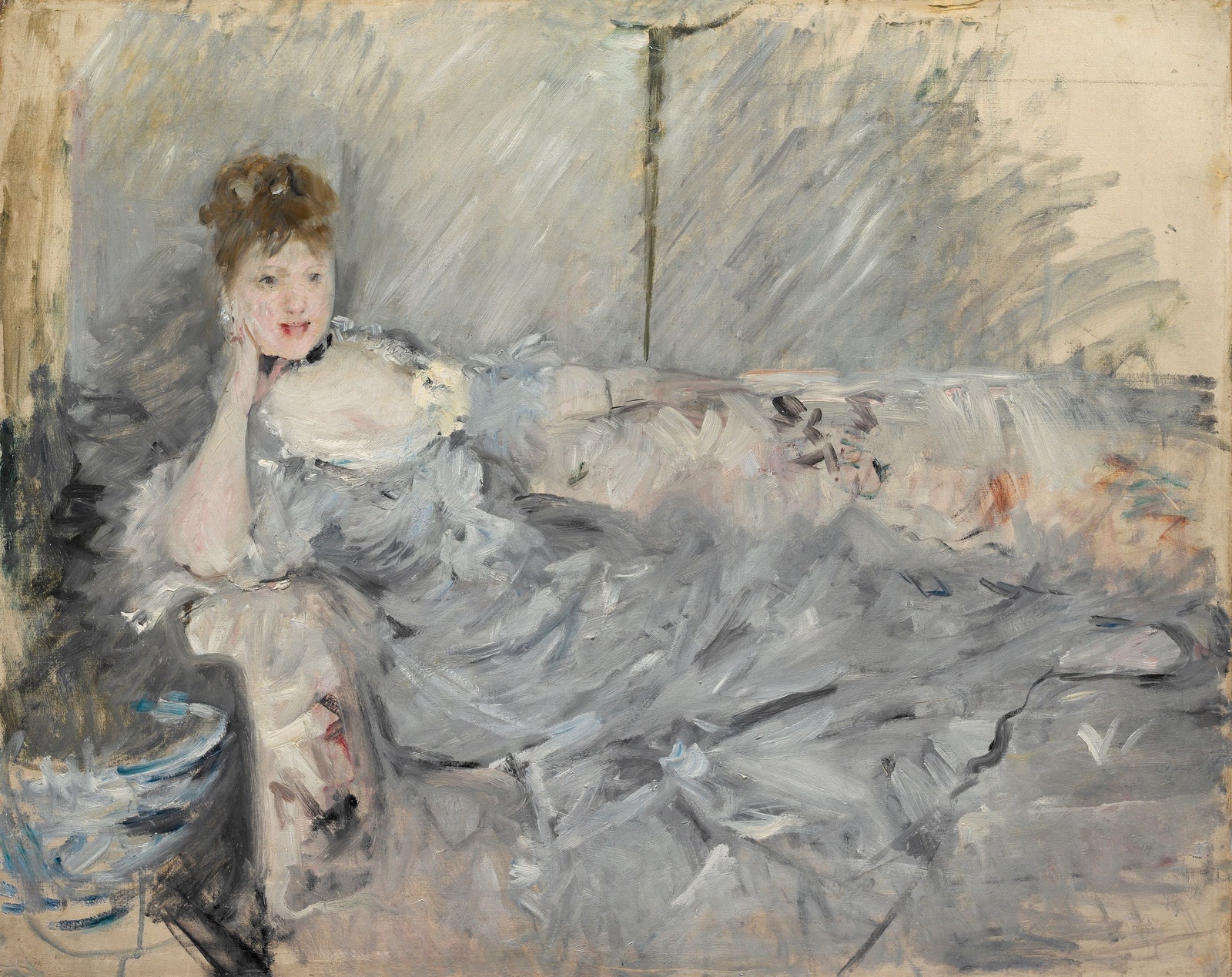 In Reclining Woman in Grey (1879), a fashionable Parisian reclines on a settee, though her dress—a frenzy of fast brushwork—is almost undistinguishable from the background. Digital reproductions can’t convey the tactile accomplishment. When light hits the strokes, they seem still wet. Morisot, more than any of her contemporaries, was skilled in embodying her female subjects with selfhood. Unlike Degas’ ballerinas or Manet’s nudes, Morisot’s women are free of objectification.

Morisot liked to paint outdoors when she could, a practice which invited scandal given that at the time, when women were expect to leave home with a chaperone. (Add to this the fact that painting indoors was still the gold standard for all artists, regardless of gender.) At the start, her outdoor works, while still brushy and loose, looked largely like real life. In the splendid Reading (The Green Umbrella), from 1873, a female figure is bent over a book on the grass. The titular umbrella lays discarded to her left. The painting reads as a fleeting moment of leisure, free of domestic duty. Her subject’s face is absorbed in the story, so much as it appears blurred, while her white gown is clearly rendered against the lawn. 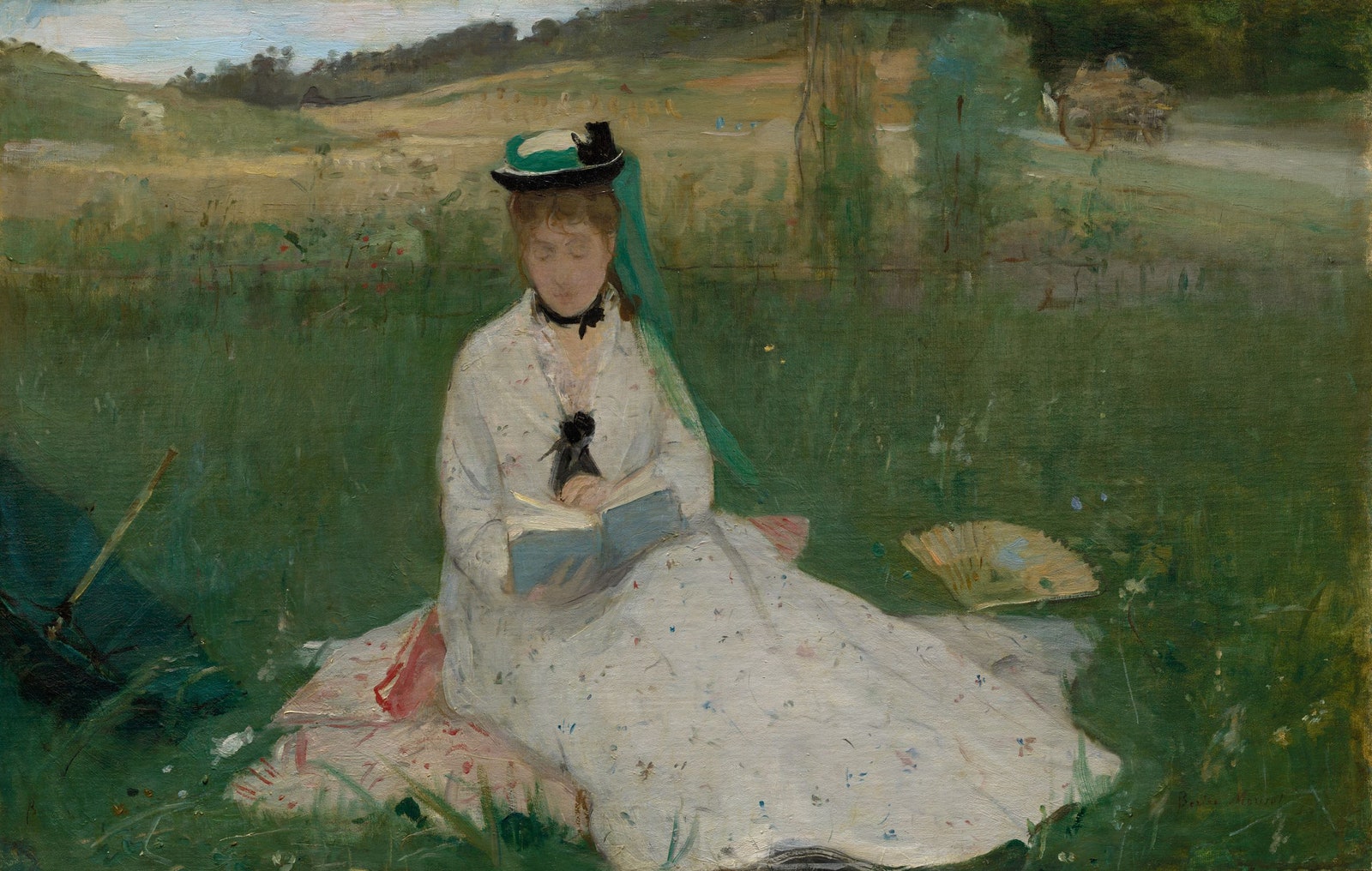 Now compare that canvas with the later work The Garden at Maurecourt (ca. 1884). In the span of a decade, Morisot’s work lost its rigidity and expanded its emotional depth. The child and chaperone are made of visible brushstrokes, or “daubs,” as she called them. The adult’s expression is largely inscrutable—her eyes are small black pools, and the flora in the foreground are merely a series of strokes in varied green tones. Here, figuration nearly becomes abstraction. 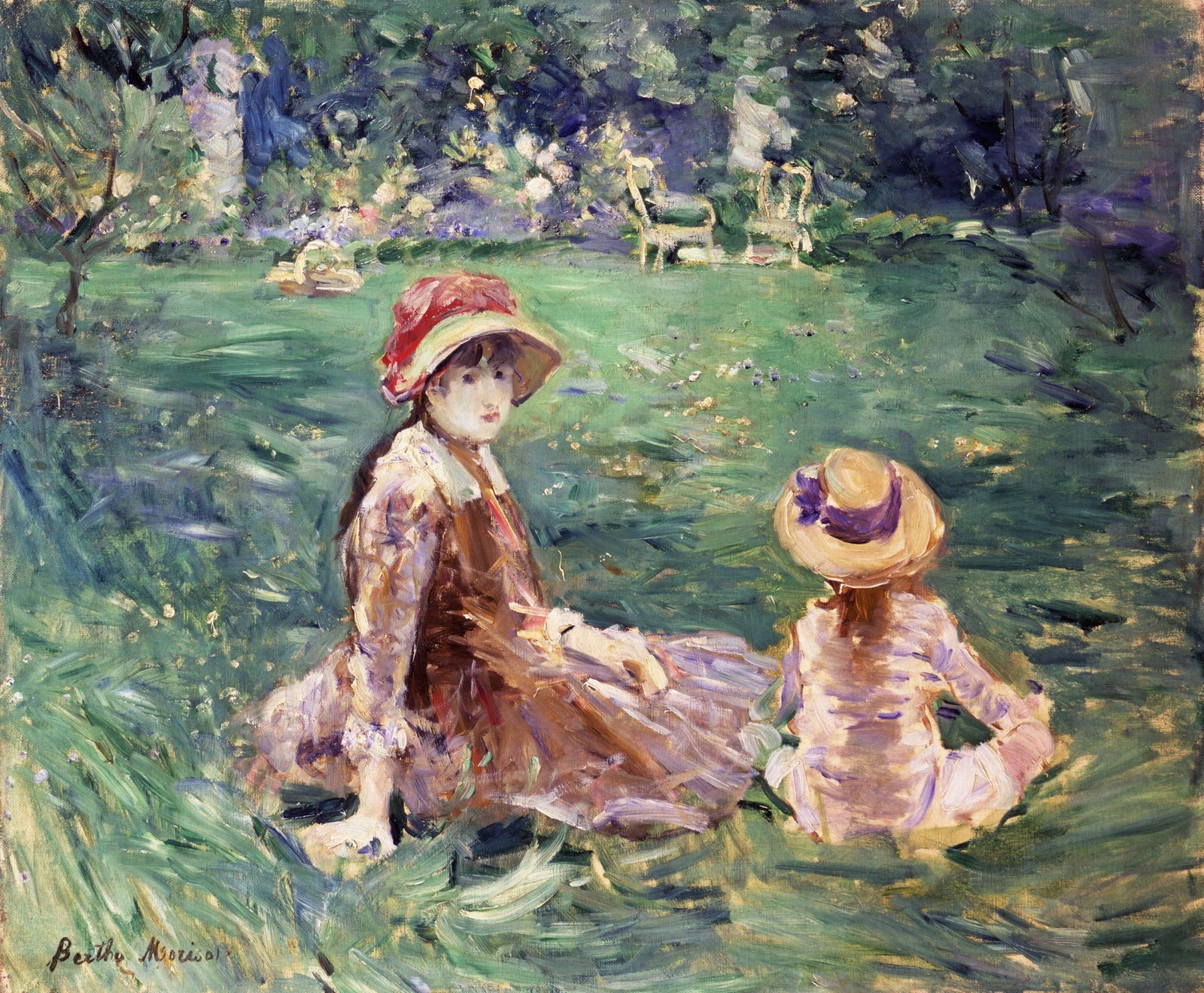 Morisot was restless, and in the last years of her life her studies of motion gave way to scenes of introspection. The rapid brushstrokes which had defined her practice for years became clearer, and her images came back into focus. In the portrait Julie Dreaming (1894), Morisot’s red-headed teenage daughter stares sullenly forward. Her moon-face glows against unbroken streaks of green and gold. The statuesque pose is a jarring departure from Reclining Woman in Grey. We can only guess at the next evolution of Morisot; she died of pneumonia the following year, at age 54. 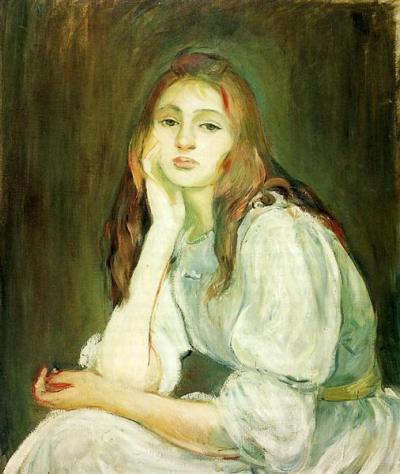 At the debut of her first solo show in 1892, Morisot wrote, “Truly, we are worth something through a feeling, an intention, a vision which is more delicate than that of men and if by good luck, we are not impeded by affection, pedantry and over-refinement, we shall be able to do a great deal.” That, she has assured, is evident.

END_OF_DOCUMENT_TOKEN_TO_BE_REPLACED

Around the Block: David Zinn’s Quirky Chalk Cartoons Spring to Life in a New Short Film

60,000 Bees Recreate the Nefertiti Bust and Other Classic Sculptures in Wax with Artist Tomáš Libertíny