American Democracy May Be Dying 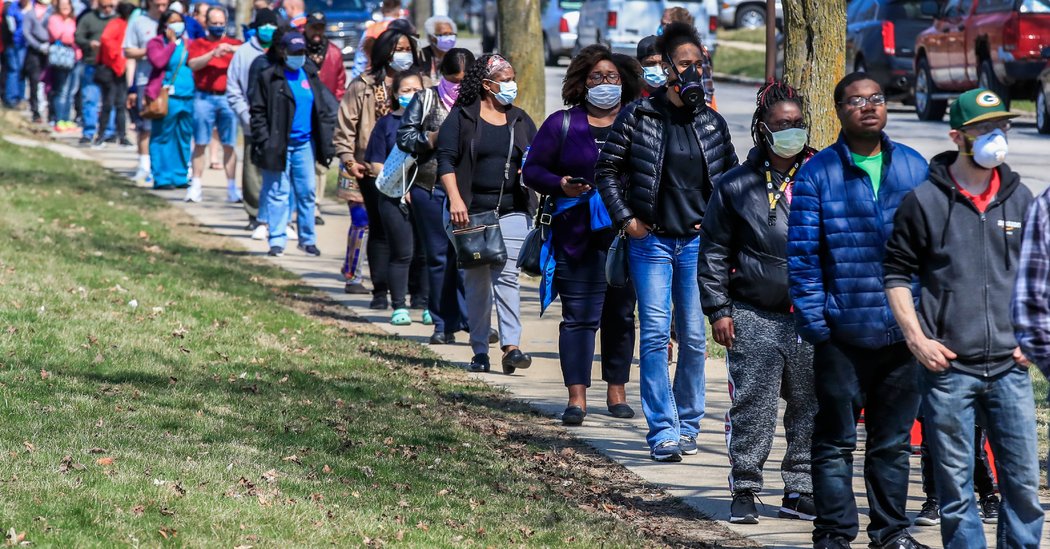 If you aren’t terrified both by Covid-19 and by its economic consequences, you haven’t been paying attention.

Even though social distancing may be slowing the disease’s spread, tens of thousands more Americans will surely die in the months ahead (and official accounts surely understate the true death toll). And the economic lockdown necessary to achieve social distancing — as I’ve been saying, the economy is in the equivalent of a medically induced coma — has led to almost 17 million new claims for unemployment insurance over the past three weeks, again almost surely an understatement of true job losses.

Yet the scariest news of the past week didn’t involve either epidemiology or economics; it was the travesty of an election in Wisconsin, where the Supreme Court required that in-person voting proceed despite the health risks and the fact that many who requested absentee ballots never got them.

Why was this so scary? Because it shows that America as we know it may not survive much longer. The pandemic will eventually end; the economy will eventually recover. But democracy, once lost, may never come back. And we’re much closer to losing our democracy than many people realize.

To see how a modern democracy can die, look at events in Europe, especially Hungary, over the past decade.

Paul Krugman’s Newsletter: Get a better understanding of the economy — and an even deeper look at what’s on Paul’s mind.

What happened in Hungary, beginning in 2011, was that Fidesz, the nation’s white nationalist ruling party, took advantage of its position to rig the electoral system, effectively making its rule permanent. Then it further consolidated its control, using political power to reward friendly businesses while punishing critics, and moved to suppress independent news media.

Until recently, it seemed as if Viktor Orban, Hungary’s de facto dictator, might stop with soft authoritarianism, presiding over a regime that preserved some of the outward forms of democracy, neutralizing and punishing opposition without actually making criticism illegal. But now his government has used the coronavirus as an excuse to abandon even the pretense of constitutional government, giving Orban the power to rule by decree.

If you say that something similar can’t happen here, you’re hopelessly naïve. In fact, it’s already happening here, especially at the state level. Wisconsin, in particular, is well on its way toward becoming Hungary on Lake Michigan, as Republicans seek a permanent lock on power.

The story so far: Back in 2018, Wisconsin’s electorate voted strongly for Democratic control. Voters chose a Democratic governor, and gave 53 percent of their support to Democratic candidates for the State Assembly. But the state is so heavily gerrymandered that despite this popular-vote majority, Democrats got only 36 percent of the Assembly’s seats.

And far from trying to reach some accommodation with the governor-elect, Republicans moved to effectively emasculate him, drastically reducing the powers of his office.

Then came Tuesday’s election. In normal times most attention would have been focused on the Democratic primary — although that became a moot point when Bernie Sanders suspended his campaign. But a seat on the State Supreme Court was also at stake.

Yet Wisconsin, like most of the country, is under a stay-at-home order. So why did Republican legislators, eventually backed by the Republican appointees to the U.S. Supreme Court, insist on holding an election as if the situation were normal?

The answer is that the state shutdown had a much more severe impact on voting in Democratic-leaning urban areas, where a great majority of polling places were closed, than in rural or suburban areas. So the state G.O.P. was nakedly exploiting a pandemic to disenfranchise those likely to vote against it.

What we saw in Wisconsin, in short, was a state party doing whatever it takes to cling to power even if a majority of voters want it out — and a partisan bloc on the Supreme Court backing its efforts. Donald Trump, as usual, said the quiet part out loud: If we expand early voting and voting by mail, “you’d never have a Republican elected in this country again.”

Does anyone seriously doubt that something similar could happen, very soon, at a national level?

This November, it’s all too possible that Trump will eke out an Electoral College win thanks to widespread voter suppression. If he does — or even if he wins cleanly — everything we’ve seen suggests that he will use a second term to punish everyone he sees as a domestic enemy, and that his party will back him all the way. That is, America will do a full Hungary.

What if Trump loses? You know what he’ll do: He’ll claim that Joe Biden’s victory was based on voter fraud, that millions of illegal immigrants cast ballots or something like that. Would the Republican Party, and perhaps more important, Fox News, support his refusal to accept reality? What do you think?

So that’s why what just happened in Wisconsin scares me more than either disease or depression. For it shows that one of our two major parties simply doesn’t believe in democracy. Authoritarian rule may be just around the corner.

END_OF_DOCUMENT_TOKEN_TO_BE_REPLACED

These Are The 7 Shoes You Need This Fall

In February, when this fall’s selection of footwear was first presented, we had little to no idea how 2020 would play out. For one, we didn’t know we’d be spending most of our time inside, making anything with too high a heel or an uncomfortable strap impracti... END_OF_DOCUMENT_TOKEN_TO_BE_REPLACED

What’s At Stake On Tuesday.

Despair or denial – are these the only options in the run-up to election night? | Emma Brockes

The Pandemic of Fear and Agony