A lottery for ventilators? Hospitals prepare for ethical conundrums 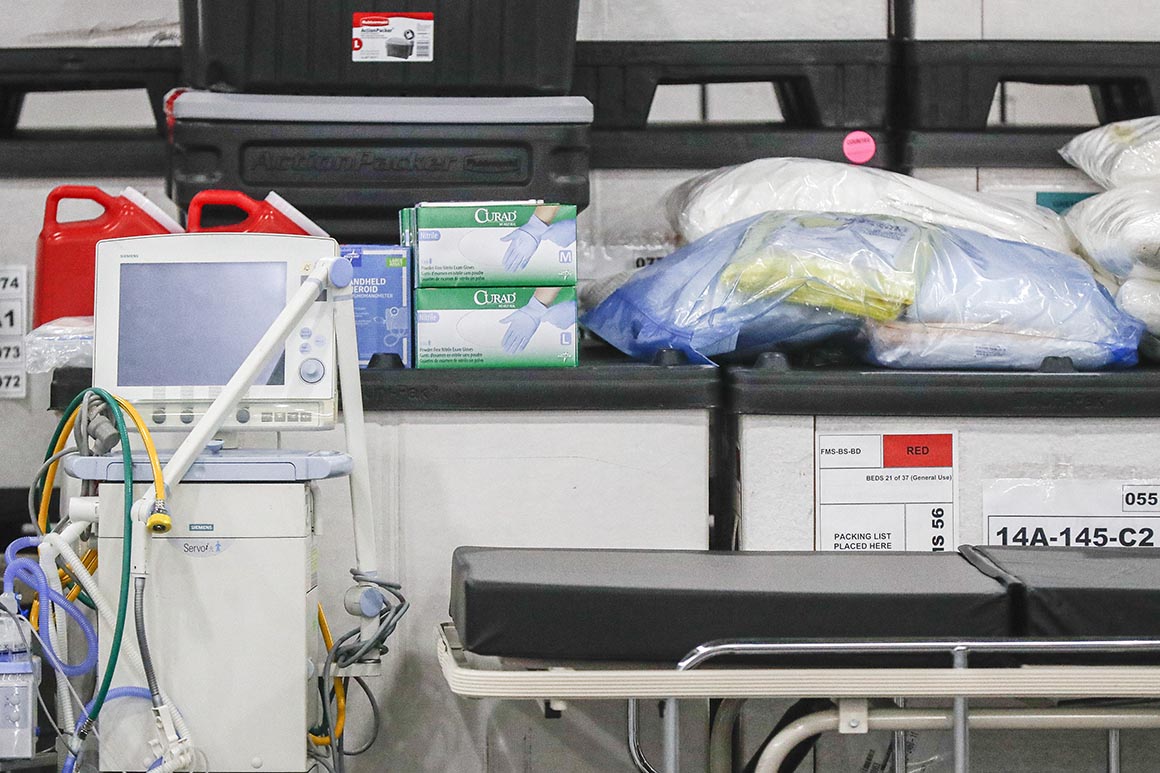 When a group of doctors, ethicists and religious leaders got together to write New York’s 2015 ethical guidelines for allocating ventilators in a pandemic, they coalesced around a clear principle: Scarce resources should go to the person most likely to be saved. But they had to contemplate another, tougher, situation: What if a number of patients were equally likely to benefit?

In that case, they decided, a lottery might be the fairest option.

The specter of such extreme rationing – a large number of critically ill patients confronting a finite supply of life-saving machinery – was grim but theoretical when debated by the philosophically minded panel. Now, as New York and other states gird for the possibility of a shortage of ventilators, that ethics roadmap could come actually into practice.

Even scarier is the prospect confronting many other states which could also see coronavirus overwhelm their hospitals: No guidelines at all.

“We haven’t had a national conversation about how we are going to prioritize,” said Ezekiel Emanuel, a physician-ethicist now at the University of Pennsylvania who was a health adviser to President Barack Obama. “We are not prepared for triage.”

Among hospitals around the country, there are widely accepted basic ethical principles on establishing priorities for health treatment, and dozens of bioethics and pandemic planning reports that stress directing scarce resources to patients likely to benefit. But there’s no uniform, national framework for emergency rooms across the country to turn to in crisis. Only a few states have worked out their own guidelines, with hard-hit New York and Washington state among them. New Jersey, another hot spot, rushed to set up an advisory committee just this week.

“That is, I would have to say, one of the more difficult issues we will be discussing,” New Jersey Health Secretary Judith Persichilli said of potential ventilator shortages.

As of Thursday evening, no one had been denied a ventilator because of a capacity shortage, even in the jam-packed hospitals of New York, White House response coordinator Deborah Birx stressed. There’s an urgent scramble to buy more, build more and better allocate those available – although President Donald Trump told Fox News he had “a feeling” the shortage was exaggerated.

Nonetheless, public-health experts said many hospitals have inadequate guidance – legal or ethical – to develop protocols on who gets priority.

“These are topics we don’t like to talk about – triage, resource allocation, extreme scarcity,” said Nancy Berlinger, a prominent bioethics researcher at the Hastings Center, a New York state-based think tank, who is working on a more consistent national approach. “We don’t have coordination across the country or at the state level. Hospitals and health systems are trying to figure it out for themselves.”

Addressing that need, Emanuel and a team of fellow bioethics experts recommended in a New England Journal of Medicine article that hospitals and emergency departments put in place real-time rapid response teams – scaled down, souped-up versions of the standard hospital ethics committee reviews. Acting on a compressed timeline, these clinical triage experts can make tough decisions – sparing the bedside physicians from deciding on their own whether the patient in front of them lives or dies.

That’s a haunting emotional burden which the world has seen Italian doctors experience.

Guidelines aren’t a simple checklist, and there’s no arbitrary cutoff based on age alone. New York’s guidelines, which were developed for flu but applicable for Covid-19, are nearly 300 pages. They are not mandatory but offer a framework. They say that to save the most lives “patients for whom ventilator therapy would most likely be lifesaving are prioritized.” That recognizes that ventilators aren’t miracle cures; some people in poor health could stay on a ventilator for weeks and still die, while someone with better odds doesn’t get access. So the breathing machines should go to the patients most likely to benefit.

The New York report concluded that when multiple patients are equally likely to recover, but there are limited resources to help them, hospitals “utilize ‘random selection’ (e.g., lottery) methods.”

The panel concluded that a lottery was more equitable than treating people on a first-come, first-serve basis, which could disadvantage “those who are of lower socio-economic means who may not have access to information about the pandemic or to reliable transportation, or minority populations who might initially avoid going to a hospital because of distrust of the health care system.”

Given how little ordinary Americans prepare for end-of-life care, the Trump-fanned currents of distrust in science, and the hangover from the false “death panel” narrative of Obamacare, there’s lots that can go wrong in approaching the question of who gets priority for ventilators.

Indeed, Betsy McCaughey, a historian turned conservative health policy commentator who was one of the Obamacare critics associated with the false “death panel” attacks, is blaming any eventual coronavirus-related rationing on Gov. Andrew Cuomo’s mismanagement. In one New York Post article, she referred to ethics experts as “triage officers” and added, “In truth, a death officer. Let’s not sugarcoat it.”

“It won’t be up to your own doctor,” she said. In fact, people’s regular doctors would seldom be directly involved with a patient’s care in ERs and ICUs.

Ethicists also agree that wealth, socio-economic status, or the ability to pay for care shouldn’t matter. And that policies have to be transparent. But some Americans, anxious about their own family’s susceptibility to Covid-19 and confused by the mixed messaging from government, may be skeptical about whether the system really treats everyone fairly — particularly after celebrities, athletes and politicians got access to coronavirus testing when very sick ordinary Americans could not.

“It’s got to be fair and transparent,” said Diane Meier, a geriatrician and palliative care doctor who directs the Center to Advance Palliative Care. A clinical triage team making decisions shouldn’t even know whether the patient is a homeless person or the president.

A lack of ventilators may be capturing public attention right now but it’s not the only ethical issue that could confront hospitals and caregivers. Coronavirus is a brutal disease that causes respiratory distress; those whose lives it takes do not go gently into the night, said Joanne Lynn, a nationally known geriatrician who does aging policy at the Altarum Institute.

“No one is talking about morphine supplies or where the skill set is [to care for dying patients],” said Lynn, who has also worked as a hospice doctor. “We need to have advance care plans and the capacity to take care of people outside the hospital. And to remove bodies in a way that doesn’t endanger public health or public sensibilities.”

The fact that many Americans don’t have documented plans setting out their end of life wishes – even among nursing home patients – adds to the uncertainty. Some patients may not want to go to the hospital and die after days tethered to a machine; they would prefer palliative care or hospice. But if they, or their families, haven’t made those preferences clear before a crisis, it’s difficult to have those careful, layered conversations amid a pandemic, said Cheryl Phillips, a geriatrician who is now CEO of the Special Needs Plan Alliance, a trade association for health plans that work with vulnerable older adults.

Well over 100 nursing homes have reported coronavirus infections, and their patients are by definition frail. But nursing homes don’t necessarily have the procedures or resources in place to keep a patient with such a life-threatening infectious illness without risking spreading it. In that case, they may decide to send the sick patients to the hospital, whether they want to go or not.

And it’s hard for hospices to fill the gap for patients who may be dying in nursing homes. If the homes are on lock down, hospice staff can’t enter – and hospice staff aren’t getting access to masks and other protective gear as hospitals get priority. In addition, under current regulations – some of which were relaxed somewhat in the stimulus package Congress just passed – there are limits to how much hospices can do via telemedicine.

“Our field stepped up during AIDS and we’re stepping up now,” said Edo Banoch, president and CEO of the National Hospice and Palliative Care Organization. He wants to make sure that people who may be discharged from hospitals or never go to one don’t suffer unnecessarily. But there’s only so much hospice workers without protective gear can do with risking infecting themselves – and then the passing on coronavirus to next patient’s family.

END_OF_DOCUMENT_TOKEN_TO_BE_REPLACED

The museum may be moving closer to sending the object back, even though it has not yet done so. END_OF_DOCUMENT_TOKEN_TO_BE_REPLACED