The best white sneakers for men are more than a mere wardrobe staple—they’re the base of the menswear food pyramid, the pair of shoes you’ll likely reach for more than any other in your closet for six-to-eight months out of the year. As such, there are more white sneaker options out there than ever before: all-time classics, upscale designer models, affordable upstarts, and wild-style flexes.

There are the sneakers you lust after, drool over, and dream about…only to come up short on the SNKRS app when they drop, shell out a month’s rent to cop them on the secondary market, and then let them collect dust in a box on your shelf because you’re too anxious about creases. These sneakers are not those sneakers. The best white sneakers are the kicks you actually wear—the ones that go with everything, look as good on their 300th wear as they do on their first, and are readily available at a department store near you. 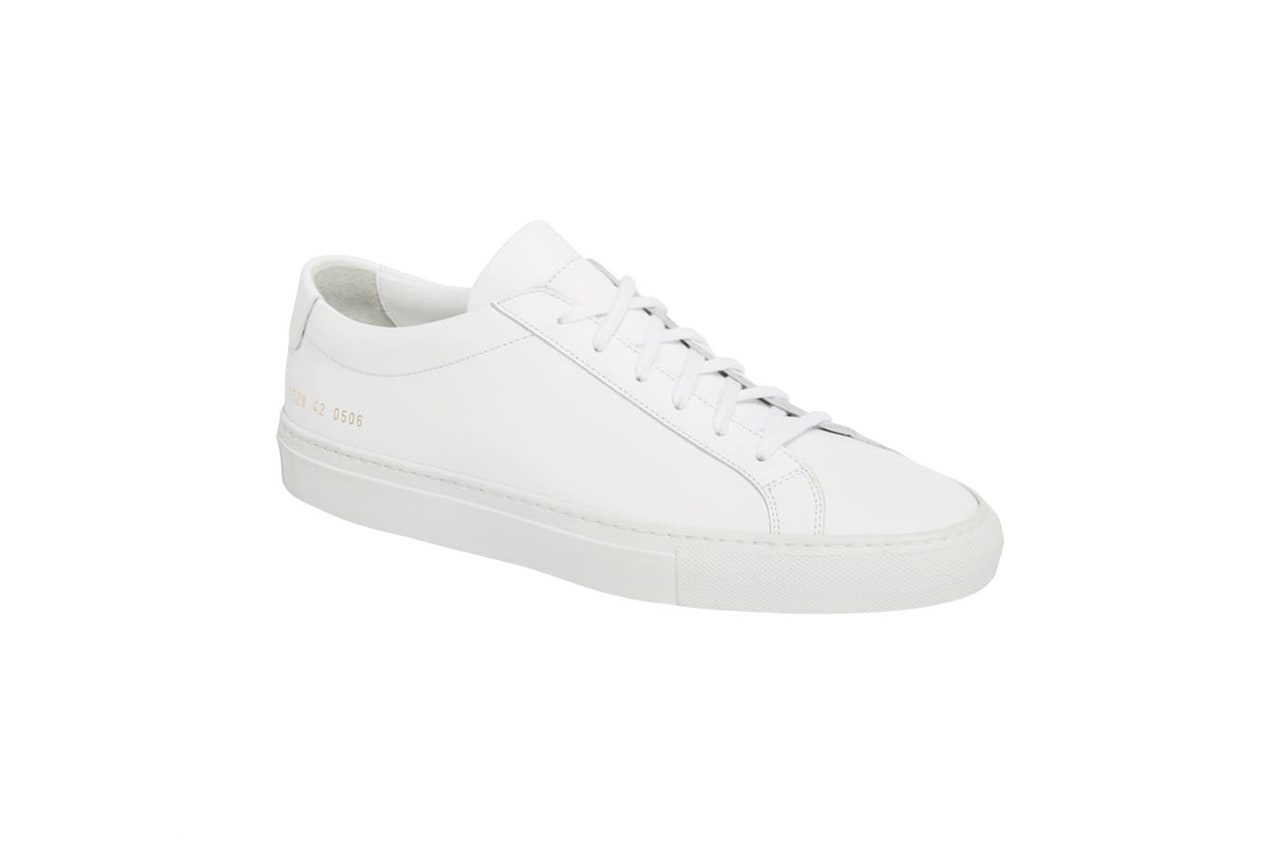 These days, the luxury sneaker market is flooded with riffs on streamlined, minimalist-leaning white leather kicks. But Common Projects did it first with their Original Achilles Low model in 2004—and they did it best. Like any other well-designed object, this no-frills, logo-less, low-top lace-up has stood the test of time (and every of-the-moment footwear trend) since it first hit store shelves. C.P. founders Flavio Girolami and Peter Poopat’s design carries all the hallmarks we look for in an all-purpose sneaker: top-notch construction, durable materials, and the ability to look as good sitting under the frayed hem of our favorite jeans as it does anchoring a slim suit on casual Fridays. Every Achilles is constructed from Napa leather—the supple stuff you normally find on pricey couches or four-figure leather jackets—in a century-old factory in Italy’s Marche reigion. Thanks to the well-honed cobbling skills of an espresso-fueled factory worker, you can be sure these sneakers aren’t going to start falling apart after the third or 300th wear. That’s because you’re getting actual shoemaking, not just an assembly-line glue-and-press job. It means that instead of tossing them out at the first scuff, you can shine them and resole them like a dress shoe to keep ’em fresh—which you’ll be plenty incentivized to do, given the not-inconsiderable pricetag. 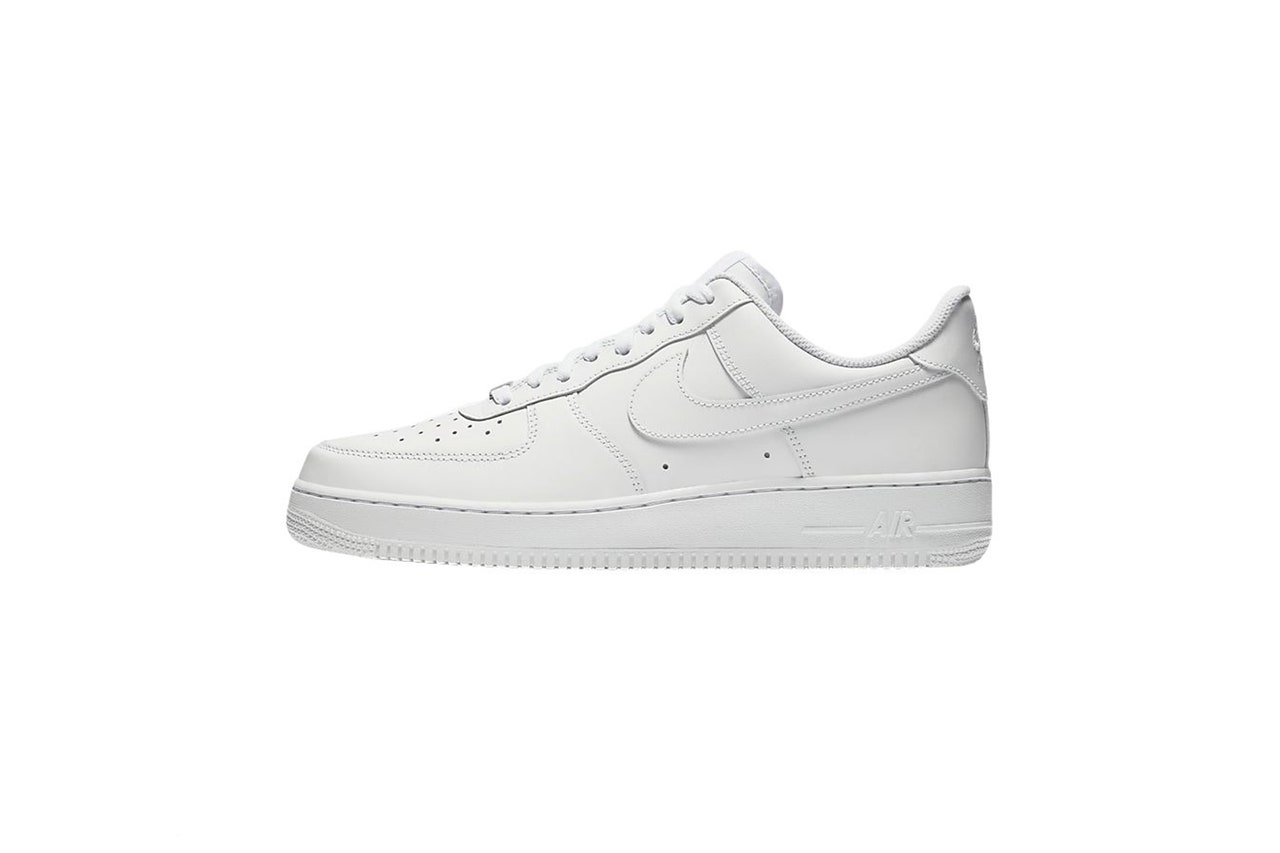 All real sneakerheads know that black Air Force 1s are a bad omen—if you see someone in them, it means you should turn and run. White Air Force 1s, on the other hand, are a sign of nothing beyond the wearer’s very fine taste. Since 1982, when they were introduced as Nike’s first basketball model to feature its revolutionary Air tech, the AF1 has held it down as the Swoosh’s single most reliable model. It’s hardly the flashiest Nike ever released, or the best performing on the court, or the most storied—but it’s tasteful, understated, and wholly timeless, three adjectives that don’t get thrown around in sneaker circles often enough. Long before Balenciaga made clownishly oversized sneakers a thing, Air Force 1s were chunkier and more bulbous than any of the sneakers that came before them. When doused in all-white, those proportions—along with the perforations on the toe and the panelling along the sides—feel all the more statuesque. And while they look incredible fresh out the box, they’re among a rare class of white leather kicks that genuinely still look killer smoked to high hell. Whether you’re on your first pair or your 40th, it’s never really a bad time to pick up another. 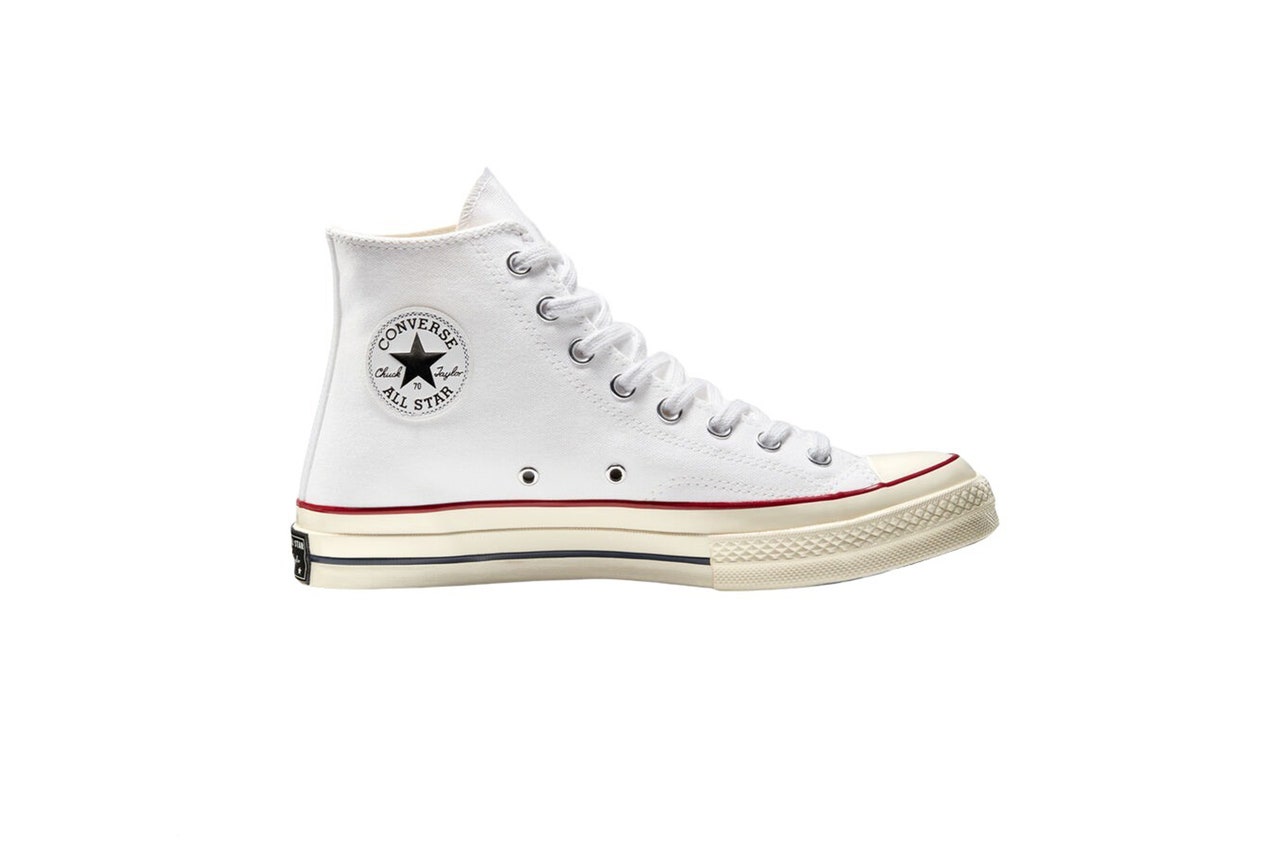 Looks-wise, Chuck Taylors have hardly changed at all since they first hit the hardwood in the early 1920s. Why mess with perfection? In terms of construction, though, the no-frills GOAT hit its peak in the ’70s: the canvas was weightier than on today’s standard models, the rubber midsole rode up a little higher, the toe cap was a touch smaller, and the patch on the back of the heel was a cool retro black rather than the standard white. A few years back, Converse decided just to make them that way again—for a cool $85, the Chuck 70 gets you all those minor design upgrades, plus the benefit of a modern cushioned insole installed into the thicker vintage outsoles. They’re the same Chucks you’ve worn forever, only better in all the ways that matter. 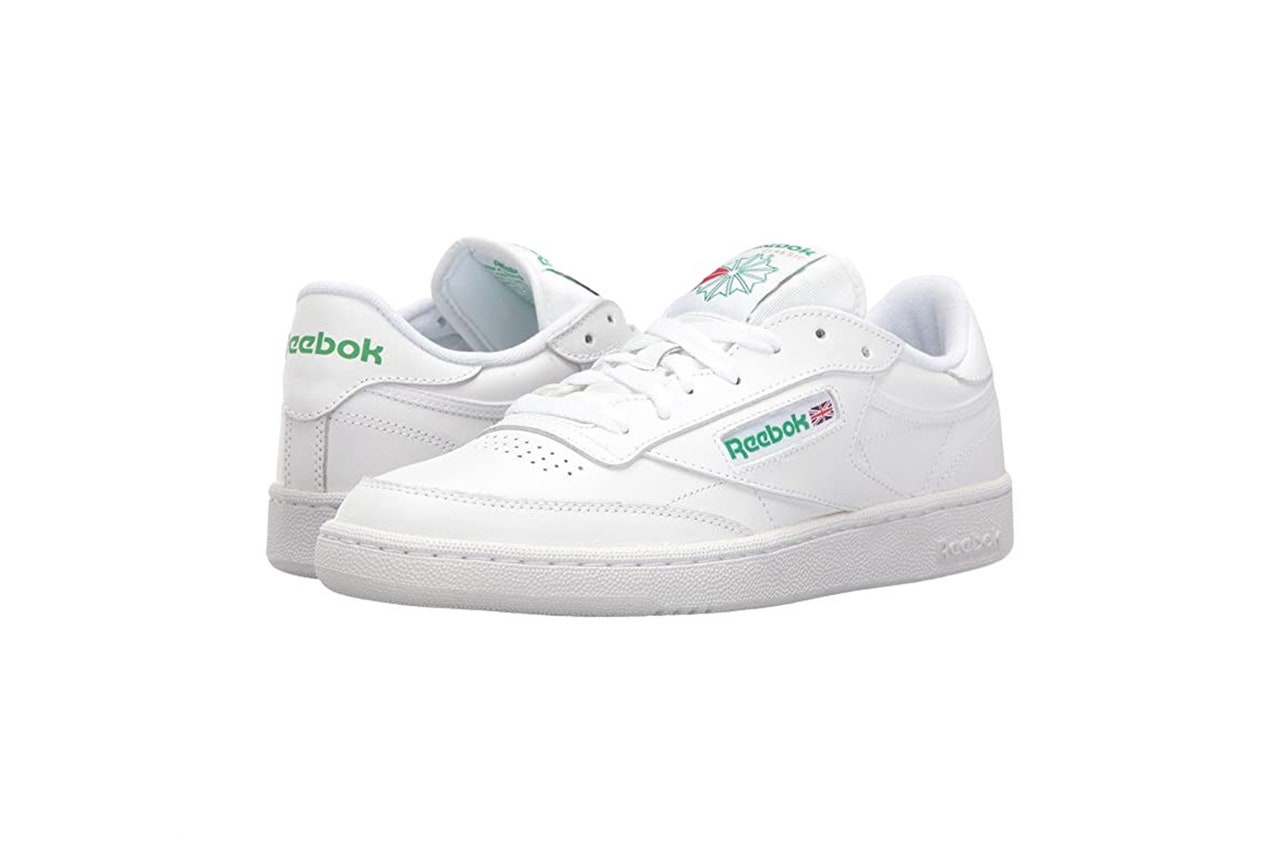 If Pete Doherty’s lyrics and every issue of NME I read as a teen are to be believed, these are the most-worn sneakers—or, I’m sorry, trainers—by wayward youths in the British Isles. They’re also the very same kicks that friend-of-GQ Jake Woolf turned to when he was looking to nip his sneaker habit in the bud. What makes the Club C such an ideal all-pupose shoe? They’re non-descript enough to work with everything in your wardrobe, but are still distinctive enough (that tiny Union Jack on the logo!) as to not look totally bland. If you’re looking to switch up your regular rotation of Chucks and Stan Smiths—or you’re just, like, a really big Pulp fan—these are the way to go. It might seem crazy now, close to a decade into its comeback, but for awhile there it was really hard to find a pair of Stan Smiths. In 2011, for reasons unbeknownst to us—maybe a lack of sales, maybe to create an artificial scarcity—Adidas ceased production of their most iconic tennis shoe for the first time since its launch in the early ’70s. Suddenly, the once-ubiquitous sneakers were popping up on eBay for quadrouple the retail price. By the time they brought them back around in 2014, people were clamoring for the OG low-tops, leading to the Great Stan Smith Boom of the 2010s. For a couple of years there, it seemed like every celebrity on the planet was stepping out in the Three Stripes classics, and scarcely an issue of GQ would go by without them popping up somewhere in our pages. The relaunch hysteria has thankfully faded over time, but the Stan Smith’s appeal absolutely hasn’t. If you don’t have Common Projects money, or maybe even if you do, these $80 icons will give you all the ultra clean vibes you could ask for. Hell, they practically invented the idea of a minimalist white sneaker. Just pray Adidas never takes them away again. 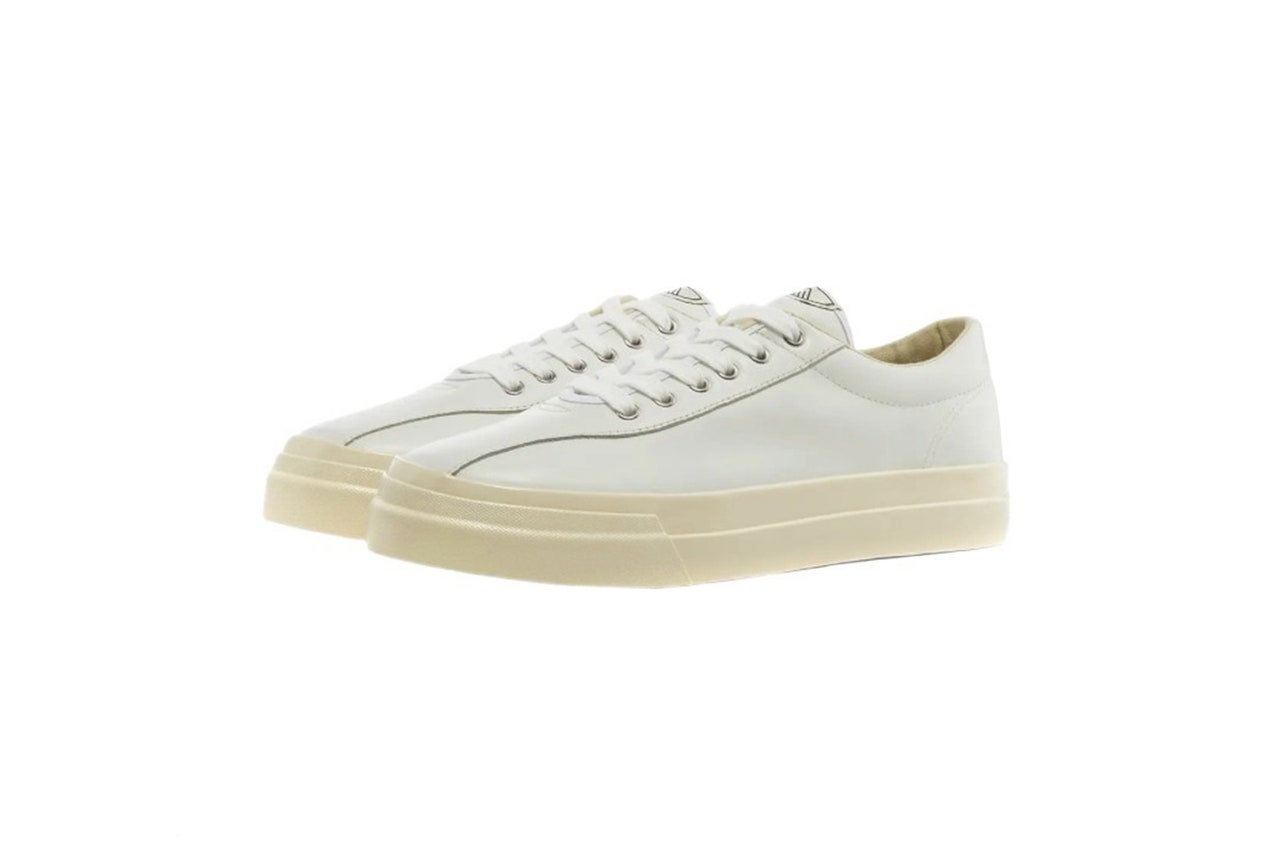 A lot of upstart brands try their hands at making retro vulcanized sneakers, but almost none of them have as rich a backstory and distinct a point of view as Stepney Workers Club. Founded in London in 2018, S.W.C. borrows its name from a 1920s anti-fascist sports group, and its signature model—the Dellow—is based directly on an old canvas sneaker the brand’s designers once came across. They updated the simple design and beautiful construction, added their own winsome handshake logo, and then decked the shoe out in a wide range of colors and materials. These days you can find the Dellow in smooth suedes and hardy canvases, but for our money the best makeup is this white leather version—which clocks under $90 for a sneaker with decades of history and smart design under its belt. That’s how you craft an instant classic, kids.

The Best White Sneakers for Racing Through the Mountains: Salomon Speedcross 3 ADV 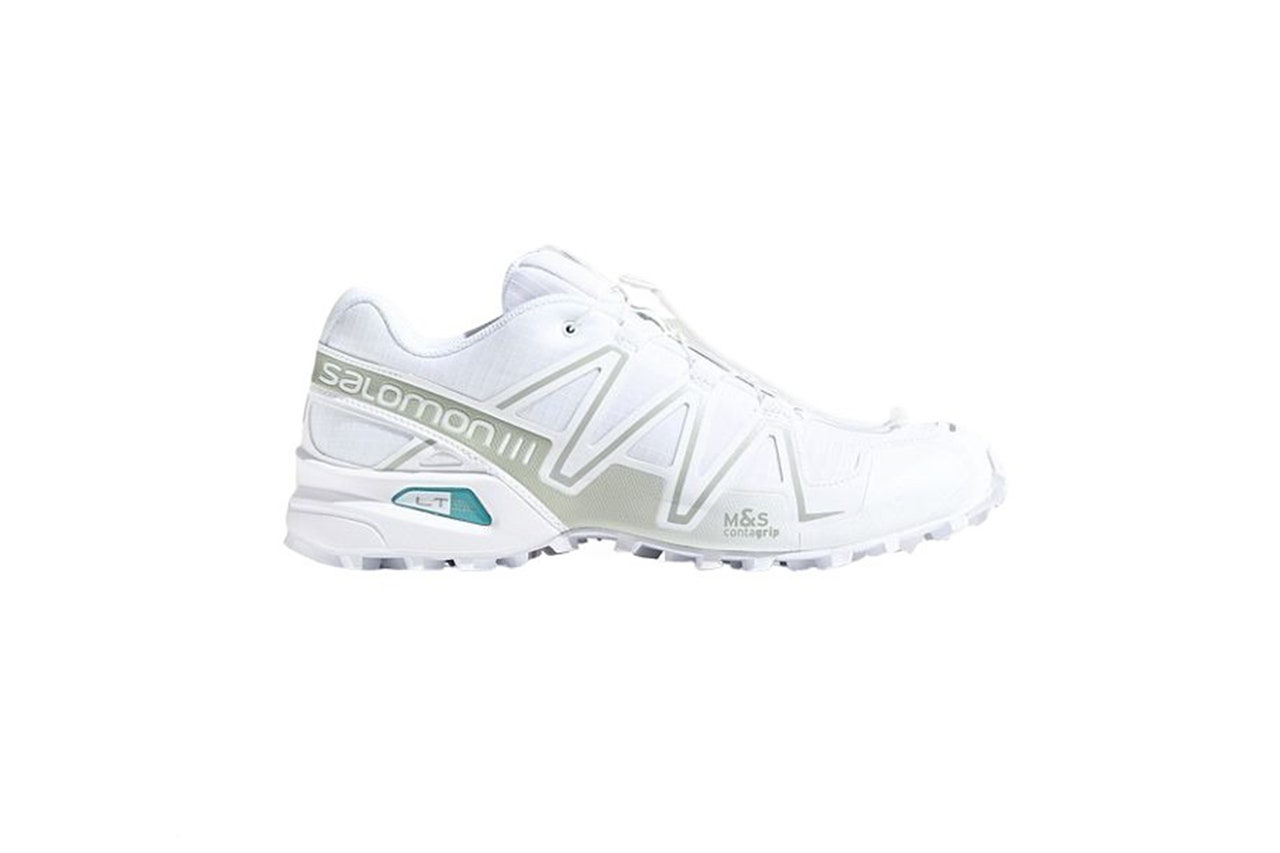 When the legendary French outdoors outfitter Salomon began looking to introduce their high-performance trail runners to the lifestyle market, they scoured their archives for silhouettes—like the smash hit XT-6—that could serve as techy canvasses for wild colorways: electric limes, fire truck reds, fresh ocean blues. As it happens, though, Salomon’s shoes look plenty good devoid of color altogether, too—especially the uber-iconic Speedcross 3, whose specific clash of materials make it a perfect candidate for the tonal treatment. The nylon mesh, textured rubber, and and rich leather on the uppers work even better together iced out in glacial whites, and the grippy lug soles seem somehow fiercer. Like all Salomon kicks, the Speedcross 3 has all the tools to conquer craggy mountainsides, but they’ll perform just as well on the streets with all manner of fits if you’re the kind of guy who never leaves the city. New Republic’s streamlined sneakers mimic many of the same details as the Achilles (including stitching and a logo-less design) for less than a quarter of the price. If you’re less concerned with your white kicks lasting for years or have a tendency to get nice things dirty, this is your sneaker. 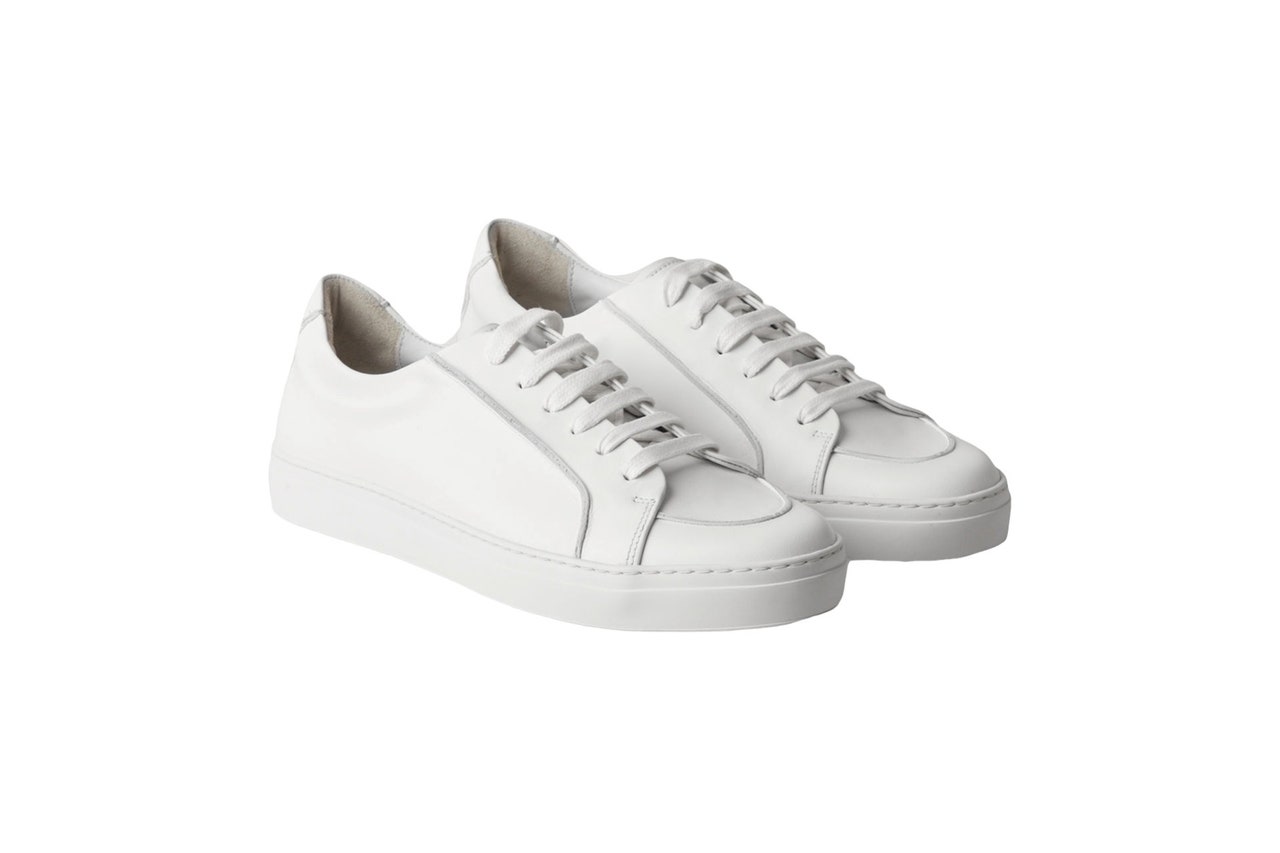 How do you goth-ify a white canvas sneaker? If you’re Rick Owens, you warp and elongate the silhouette, prop it up on a hulking shark tooth sole, and stitch the words “SOMBRA OBSCURA”—Spanish for “Dark Shadow”—along the heel. If comfort is your main consideration, Ultraboosts feel like stepping into a bucket full of marshmallows sitting on a trampoline—except, you know, not sticky and gross. 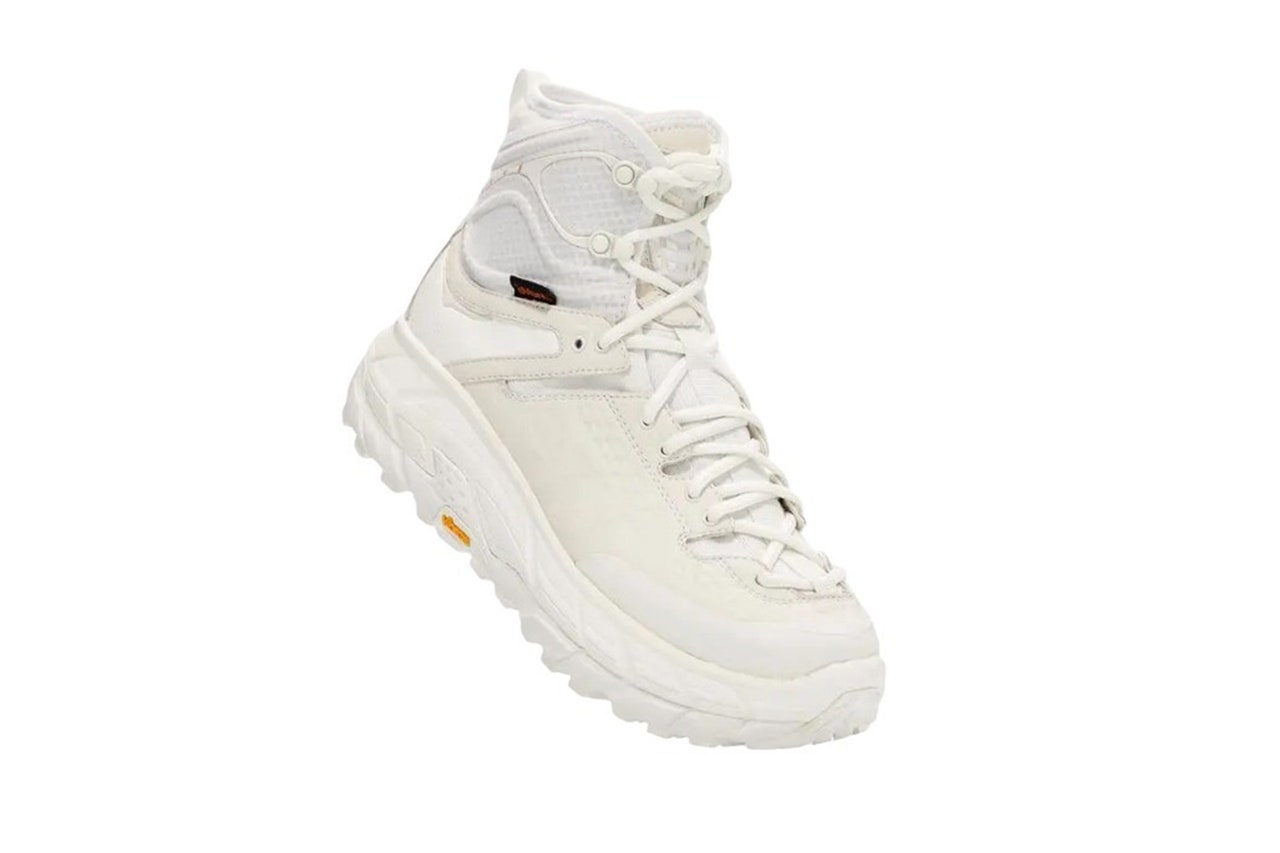 These are built like a combat boot—which makes them just right for crappy weather—but they’re nearly as weightless as your road runners. No matter how long this Vans boom lasts, all-white Old Skools are forever. Italian style gods have sworn by these canvas kicks for the better part of a century. Margiela’s elevated spin on a classic German army trainer has been an upmarket smash for more than two decades. This Is How Much It Costs to Wear All Cashmere Everything

END_OF_DOCUMENT_TOKEN_TO_BE_REPLACED

The frescoes were found during routine restorations. END_OF_DOCUMENT_TOKEN_TO_BE_REPLACED

For Black Women, Roller Skating Is The Ultimate Form Of Self-Expression